Conscience is Alice Mattison’s latest (2018) novel, and I think it’s a great contender for a book club read. It’s rich with ideas and ambiguous about who’s to blame, which makes for meaty discussion. The story centers on the decades-long marriage between Griff and Olive, two mid-life people who came of age during the 1960s. They were active in the Vietnam War protests. They each made potentially life-altering decisions back in their early 20s, but the stories they tell themselves from that era haunt their contemporary lives. When a book about it resurfaces, all the old ghosts reappear. Can either ever let the past go? Can anyone? 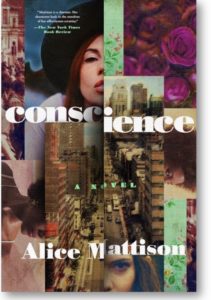 I think this book is a good choice for book clubs that like to unpack human relationships, especially marriage. An advantage here is Alice’s story is split between the past and the present. The reader is able to see how and why events that happened decades ago never really go away. You’ll be able to debate who handles it better, and how people might overcome (or not) history.

If you’re fascinated by political movements, this could be a book for you. The inciting incident occurs during an increasingly vigorous opposition to the Vietnam War. Even if this isn’t your club’s era, our present-day partisan politics will feel analogous, yet different in notable ways. In my opinion, you can talk about movements and protest without getting into the weeds of our current politics, if a peaceful book club meeting is what you’re going for!

We also did an interview with Alice about her book, which you can find here.