Growing up in a society where the Court of Owls has silenced the voices of all females, Dinah Lance still refuses to let go of her memory of a girl singing. She knows it was real even though her father denies it. In the end, it is Dinah’s inner voice that guides her along with one of her mother’s oldest friends. Dinah finds strength the only place it can truly be found – within her heart – and has the courage to let that strength lead her despite the odds. Alexandra Monir’s Black Canary Breaking Silence is at once believable and unbelievable for though it is the story of a superhero, it is also a simple story of courage and heart, showing that one voice can lead many.

Amy Wilhelm: What is it like to write an origin story for a character that people already know in a variety of other interpretations? Is it fun? Scary? A little bit of both?

Alexandra Monir: Yes, a bit of both, but mostly a dream come true! To be given the keys to Gotham City and the creative freedom to make this legendary character my own has been such a highlight of my writing career. There have been so many pinch-me moments in this process!

Definitely nerve-wracking too, because of course I really wanted to make the fans happy and get it right, but the joy of it far outweighed the nerves.

AW: The beauty and tragedy of your family’s story shines through in different places in Black Canary: Breaking Silence. For those readers who aren’t familiar with your family’s background, can you share why Dinah’s story resonates so strongly with you?

AM: My grandmother, Monir Vakili, was Iran’s foremost opera singer in the years before the Revolution. She was also a star who used her platform to advance women in the arts, like when she co-founded the country’s first coed boarding school for young classical singers. She was such a powerhouse in Iran—but after the Revolution of 1979, the new regime clamped down on women’s rights and she lost everything.

One of the many new restrictions forced on women was that they were forbidden from singing publicly, and believe it or not, that rule is still enforced in Iran today.

That’s where my idea for the plot of this book came from. Even though I was born in the U.S. years after my family’s escape from Iran, this history was always a big part of my background and identity, and something I really felt destined to write about. I never got to meet my grandmother since she died in a tragic car accident before I was born, but she’s always lived fully in my mind, and this book was a way of connecting with her on the page.

AW: In Black Canary, the voices of women are taken away. It is such a strong metaphor and rings with truth, sometimes too much truth. As a woman, mother, and daughter, the only thing I want for my own daughter is that her spirit, her voice be expressed in whatever way is meaningful to her. How cruel to take that away. Yet, the woman beneath that oppression still has a voice within her. How does she keep her sense of power when her means of expressing it are silenced?

AM: I love your wish for your daughter! 🙂 I really believe that being able to express ourselves fully and authentically is a basic human right, and it’s so upsetting to see parts of the world where that’s been taken away. In Dinah’s case, I think what helps her maintain her sense of self is finding her own little ways of subverting the system—she’s rebelling both quietly and not-so-quietly from page 1! 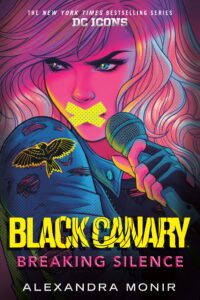 AW: The beginnings of the relationship between Dinah Lance and Oliver Queen are displayed in your novel. You do an excellent job harmonizing with the thoughts and doubts of a teenager when moving through this growing and complicated dynamic between them. How did you harness the qualities of self-doubt and hope that came across as so genuine?

AM: Thank you so much! I think I must have held onto a piece of my inner 17-year-old because I’ve always found it so natural to step into the shoes of my teenage characters. My own high school years were so formative, full of both incredible highs and crushing lows, so I think those heightened emotions just stayed with me and I’m able to turn to those memories whenever I’m writing scenes of first love, first heartbreak, etc!

AW: Origin stories for superheroes always seem to involve the loss of one or both of their parents. In Dinah’s case, it is her mother who died when Dinah was young. Why do you think that component is important?

AM: I know, these poor parents who always seem to get bumped off in hero’s journey stories!! But I think the reason so many writers utilize that story trope is that parents are the most important aspect of an adolescent’s comfort and security, so when you take that away from them, you upend their world and force them to grow up ahead of schedule—and suddenly you have a story. At the same time, characters like superheroes need to have a deep, driving motivation to go out there and risk their lives, and it’s often the loss of someone they love that pushes them to that motivation. And in Dinah’s case, she inherits something pretty crucial from her mother, so that was the biggest reason she needed to have died before our story begins.

AW: How did writing an origin story differ from writing a different kind of novel? Would you be excited to write another? Which one would you most like to create next?

AM: The writing process was the same in terms of how I plot and draft a story; the biggest difference was having such a wealth of material to work with while writing, instead of having to create the world and characters myself! I had so much fun researching and choosing which settings and characters from the DC Universe that I wanted to include and figuring out how I could sprinkle as much DC lore into my story as possible. I really loved it, and I’m so excited to be able to say that I’m writing another of my most favorite characters next! I’m currently writing a historical YA fantasy about Princess Jasmine for Disney, which is another dream come true, and it’ll be out in Fall 2022!