Ghachar Ghochar is a beautifully written family saga, set in contemporary India. It follows one tight-knit family as their uncle starts a profitable spice company, rescuing them from poverty. This newfound wealth is barely enjoyed before it is revealed to cause just as many problems as it cures.

Described as a “compact novel that crackles with tension,” Ghachar Ghochar elegantly illustrates the struggle to make ends meet, and the way economic forces can change relationships and even a person’s character.

We are delighted to talk to Vivek Shanbhag about the American debut of his novel.

Kelly Sarabyn: Ghachar Ghochar was translated into English from Kannada, one of India’s many languages. You know four languages, including English. Why did you choose to have Srinath Perur translate the book into English, instead of doing it by yourself? Generally, it seems like different languages, because of their divergent vocabularies and grammars, provide slightly altered perspectives on reality. Do you feel that the English version of Ghachar Ghochar has a slightly different feel or quality than the Kannada version? Are there any specific examples of things that might have morphed in translation?

Vivek Shanbhag: Creative writing requires a very deep engagement with language. It is the means through which a writer of fiction seeks to touch and grasp unknown dimensions of life. When I started writing, Kannada was the only language with which I had such a strong emotional and intellectual preoccupation. Therefore, it was natural for me to write fiction in Kannada. Many times, I am surprised by what appears on the pages of my stories and novels. This is the pleasure and magic of writing. I have this pleasure only when I write in Kannada.

Translating into another language requires a similar engagement with that language. Srinath is a creative writer in English, and I find his style and sensibility close to mine.

No translation can fully capture the original work because words and phrases in every language have their own memories and resonances. A sentence with the same literal meaning in two different languages  might evoke different reactions  from readers. This is the challenge of translation. While there is no single solution to this, working closely with the translator certainly helps to create an experience close to the original. Since the novel has been so well received both in Kannada and in English, and since readers seem to have liked the book for similar reasons, I assume the translation reads close to the original. 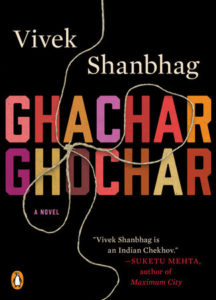 While the feel may not be different, it might be achieved in slightly different ways in the respective languages. For example, the section in which the family deals with an ant invasion is narrated in a lighter tone in the original Kannada. A sentence that does not exist in the original (“Amma resorted to chemical warfare.”) was added by the translator to achieve this lightness in the English version. I agreed to this addition, as it was so apt and worked beautifully.

KS: The protagonist remains unnamed throughout the novel, except at one point when we hear his family nickname. For me, this made the character less sharp and particular, but that lack of particularity also made it easier for me to imagine myself in his position. Why did you decide not to reveal his name? What was the intended effect on the reader?

VS: The protagonist is unnamed for the very reason you have stated. It is important to create such spaces in a work of fiction, where readers can find entry into the work. The unsaid is very very important in the art of fiction. What you hide enhances what you reveal. But this is easier said than done. The narrative should not have obvious gaps, but it must be porous enough to allow the reader’s experience to seep through it like water through invisible cracks.

KS: The protagonist was very thoughtful and observant, but he also seemed quite passive, content to rely on his successful uncle for money. His new wife, whose father is a teacher, is unhappy with his lack of work ethic. The protagonist remarks, “there’s a vast difference between the moral underpinnings of a business family and the household of a salaried teacher.” Is there something about being a business family that would make the protagonist’s lack of working more respectable? In India, would people look down on him for not working, or is having money enough?

VS: It is important to note the backdrop to the story. Certainly, the income of a family business in India is thought of as a more collective thing than when an individual draws a salary. There are also the changes of the last quarter century to be thought of—globalization and economic liberalization in India have led to a huge change in our relationship to work. I guess all this must have affected the characters of the story.

KS: In the American literary tradition, there are many books, like American Tragedy, The Great Gatsby, and Martin Dressler: The Tale of an American Dreamer, that illustrate the perils of trying to acquire great wealth. Is there a similar tradition of books in Indian literature? Culturally, is there an Indian equivalent of the American Dream of working hard and becoming wealthy?

VS: The Indian equivalent of the American Dream of working hard and becoming wealthy is as recent as three to four decades old. Hence, one doesn’t find many such stories in literature. Wealth manifested itself in a different way in the Indian context. In an agrarian society where people are heavily interdependent, wealth creation tends to be a visibly collective effort. So, even the very rich thought flaunting wealth was ugly. This is changing now with the development of technology and the rise of new industries. Now the rich feel entitled and not obliged to anyone for their prosperity. We are yet to see the full impact of the new economic order on our lives. That is a subject for books that are being written now.

KS: The made-up word ghachar ghochar (roughly meaning tangled up) seems like a perfect title for the book. The family is incredibly emmeshed and bonded, but also perpetually on edge and, ultimately, in friction with one another. Is it the norm in India to have generations living together in one household? Is the anxiety of this family, and the suspicion of others, reflective of a larger anxiety about getting by in Indian society?

VS: It is not uncommon in India to have several generations living together in one household. It was a necessity due to the economic structure. This is now changing in the cities with new job opportunities for both men and women.

Anxiety is taking center-stage all over the world, not just in India. The behavior of the family towards outsiders in Ghachar Ghochar is not very different from that of post-Brexit UK or Trump’s USA. 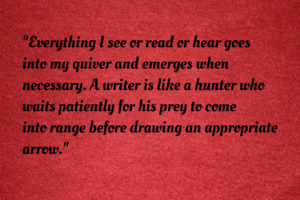 KS: A theme in the book seemed to be our variant histories and how difficult they are for others to understand. The protagonist and his family, for example, are besieged by ants, finding them everywhere in their small house. Over time, they begin to grow vicious toward the ants in response. Later on, after they have moved out of that house, the protagonist’s wife sees him crushing an ant, and is gravely disappointed. She is unaware of his prior experience with an ant infestation, and so, to her, it seems needlessly cruel. This illustrates how easily a person’s actions can seem dramatically worse if you don’t understand their origins. Is this a part of human judgment and interaction that interests you? Have the dramatic changes in Indian society in the last few decades made for more perspectives and thus more possibilities for misunderstandings?

VS: An act of violence cannot be justified using history no matter how logical and convincing it might seem. See how easily one can walk into this trap while reading this story. Is violence acceptable if there is a good reason to justify it?

Going back to the past to defend the actions of today is been a phenomenon that we see all over the world. Indian politics is muddled with it. Years ago, a right wing political party in India sought public support by saying they would bring back ‘Ram Rajya,’ an ideal state ruled by King Rama, a fictional character in the epic Ramayana. This may seem absurd but rational questions are kept aside when strong images appeal to the masses. As a writer, I appreciate the power of imagery but helplessly watch it used to manipulate perceptions. Of course, politics in the US is now familiar with invoking a great past.

KS: You were an engineer before becoming a fiction writer. Your writing style, at least as translated in English, is very elegant and sparse, which might not be surprising from someone who has a creative and scientific mind. Do you think your scientific training has affected your style or approach to writing fiction?

VS: Though it is difficult to highlight a single influence on my style, I must acknowledge the fact that the field of science and technology demands precise expression, and this might have affected how I write. A writer adopts various approaches to narrate a story, and every influence is welcome, no matter where it comes from. There are instances where I have used the traditional style of storytelling heard at temples, others where I have drawn from casual conversations overheard at a market-. Everything I see or read or hear goes into my quiver and emerges when necessary. A writer is like a hunter who waits patiently for his prey to come into range before drawing an appropriate arrow.

KS: Can you recommend some other books set in India?

VS: This can’t be a short list. Literature in Indian languages is very rich and diverse. These languages have fascinating traditions. For now, let me list the first five that come to my mind that are available in English: stories by Naiyer Masud; stories by Vaikom Muhammad Basheer; the novel Samskara by U R Ananthamurthy; God Of Small Things by Arundhati Roy; the stories and novels of Ashokamitran.

Vivek Shanbhag is the author of several works of fiction and two plays, all of which have been published to wide acclaim in the South Indian language Kannada. The first of his books to appear in English, Ghachar Ghochar was excerpted in Granta‘s 2015 India issue. You can buy his book here.