Eighteen months after her award-winning novel HORIZON  hit the shelves, Tabitha Lord released the newest in her thrilling space opera collection. As her colleague at BCB, I’m so pleased to share that INFINITY  is getting stellar – and well deserved – reviews by both fans and new readers alike. The story follows HORIZON‘s heroes Caeli and Derek, as they face the darkest struggles they’ve encountered yet. Tabitha shares the joys and difficulties involved in writing the psychologically poignant sequel to her beloved debut novel. If you’re unfamiliar with the storyline of Horizon, read my previous interview here.

Amy M. Hawes: The covers for both HORIZON and INFINITY are stunningly evocative. How did you end up with such spectacular cover art?

Tabitha Lord: I’d love to give a big shout out to my cover artist, Steven Meyer-Rassow. He is incredibly talented and amazing to 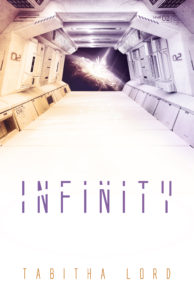 work with. You can check out Steven’s website here: //www.smrphotoart.com/One of the first things we talked about was how the HORIZON series crosses genres. I’ve been asked to describe the books in ten words and here’s what I came up with: science fiction meets romance meets survival fiction meets military thriller! The covers, therefore, needed to have wide appeal. They needed to be intriguing and eye-catching enough for non-sci-fi readers to pick up, yet stylistically still fit in with the main genre. Steven accomplished this brilliantly.

With HORIZON, the first book in the series, we also discussed “branding” it somehow. So in addition to amazing cover artwork, Steve created a title treatment that carries through to INFINITY and will give all the future HORIZON books a cohesive look.

AMH: In your opinion, what makes a successful science fiction novel?

TL: Well, there are different kinds of science fiction. I’m writing what I like – space opera. So for me, the characters and their journey are particularly important. I sometimes tell people that HORIZON is a story about the resistance movement of WWII, but set on another planet. I like playing with the idea of what makes a hero. My characters have to suffer, fall down, fall in love, and most of all evolve. If I’ve done a good job, readers will want to follow them into the next book!

Also, an important element for any science fiction novel is world building. Readers have to become immersed and invested in the civilization I’ve created.

AMH: How does one create a story, and heroes within the story, who satisfy the need for believability while also having a grand purpose?

TL: In epic space opera stories, like the HORIZON series, characters have to grapple with epic questions. For example: What decisions, large and small, will they make that will come to define them when it matters? Who will stand and fight, and who will betray their neighbor or simply look away? What is redemption and who finds it? The choices a character makes when faced with these kinds of questions help drive their development, move the plot forward, and define them as a hero – or not.

But writing a hero is, in some ways, a balancing act. The character has to evolve, make mistakes, and grow. They can’t be perfect or they aren’t interesting or believable. At the same time, we have to root for them and trust in their intrinsic goodness, even when they’re struggling. The plot will present them with challenges, but it is their response to those challenges that really connects them to the reader and invests the reader in the story.

AMH: I’ve overheard people who know you well say they can easily see you as Caeli. How much of yourself do you put into your books? Do you ever project your own habits onto your characters?

TL: I’ve definitely used my own experiences to lend credibility to my characters and scenes. For example, Caeli, the female protagonist, is alone in the wilderness when we meet her, fending for herself and living off the land. I grew up in a rural neighborhood until I was twelve years old and spent most of my playtime outdoors, in the woods, exploring and climbing trees. I distinctly remember the smell of pine, the quiet in the forest after the first snow, the taste of wild blueberries. I tried to call on my own childhood memories to give Caeli’s experience authenticity. I’m also a medical school dropout! But my experience in medical school, and for years as an EMT, I think gives Caeli some authority as a healer. And regarding my own habits, a few are in there for sure! Sometimes, it’s the little things, like Caeli’s compulsion for tidying up, or Derek’s love of scalding hot showers.

AMH: I know you are working on multiple projects – from short fiction to author interviews, to blogging, and last but not least, to completing the next book in the HORIZON series. How do you keep your head from spinning?

TL: I admit to being obsessive about working with my calendar and to-do lists, but within the framework of my calendar, I feel like I have the freedom to be creative. On Sundays, I make a detailed “to-do” list for each day of the coming week. I’ll mark off chunks of time for particular projects, and look at the overall balance of the week to make sure I’ve scheduled enough time for the most urgent things. And, as importantly, I plan my down time and self-care time into my days. These activities hold just as much weight as any deadline.

AMH: HORIZON won the Writer’s Digest Grand Prize for Self-Published Fiction in 2016. Was HORIZON’s success a source of additional stress while writing the sequel?

TL: Yes! While it was gratifying to win such a prestigious award, I definitely felt like I had a lot to live up to. It’s really important to me that I improve as a writer with every new project, so when the reviews started coming in for INFINITY, and they were actually better than HORIZON’s, I was filled with relief. I never want to disappoint my readers.

AMH: What do you think distinguishes your new novel INFINITY from the first novel HORIZON?

TL: I think HORIZON is a little weightier than INFINITY because the situation is worsening on Caeli’s home planet, and there is no solution in site. The characters are definitely showing the results of the trauma they’ve suffered. We see how the difficult choices they’ve had to make have taken a real toll on their emotional health and wellbeing. This book also contains a story within a story, which reveals the origins of Caeli’s people.

About the Author: Tabitha currently lives in Rhode Island, a few towns away from where she grew up. She is married, has four great kids, two spoiled cats, and lovable black lab. She holds a degree in Classics from College of the Holy Cross and taught Latin for years at an independent Waldorf school where she now serves on the Board of Trustees. Her debut novel, HORIZON, won the Writer’s Digest Grand Prize for Self-Published Fiction in 2016 and was named a finalist in the Next Generation Indie Book Awards and the Indie Excellence Awards. The sequel, INFINITY, was released in June 2017. She also has short fiction published and soon-to-be published through World Weaver Press, Kristell Ink, and Sci-Fi Saturday Night. Visit her website at www.tabithalordauthor.com.