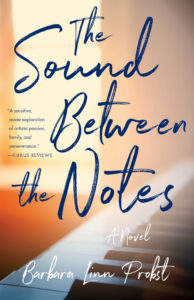 THE SOUND BETWEEN THE NOTES is the story of a woman’s struggle with timeless questions—Who am I, and where do I belong?— told through the unique perspective of a musician. Described as “a tour de force” (Kirkus, in its starred review) and “a breathtaking emotional journey” (Readers Favorite Reviews), THE SOUND BETWEEN THE NOTES is about a woman searching for what it means to be a daughter, a sister, a mother—for a way to do right by those she loves while fulfilling her artistic passion and becoming, at last, her truest self.

Like Barbara’s debut QUEEN OF THE OWLS (April 2020), THE SOUND BETWEEN THE NOTES combines a can’t-put-it-down story plot with gorgeous, lyrical language and meticulous research. We’re delighted to speak with Barbara today about her second novel!

Can you tell us a bit about the story?

The protagonist, Susannah, is a pianist who’s put her career on hold for nearly sixteen years to raise her son. An adoptee who’s never forgiven her birth mother for not putting her first, Susannah vowed to put her own child first, no matter what. And she did.

But now, suddenly, she has an unexpected chance to vault into the elite tier of “chosen” musicians—a chance for the very brass ring she thought she’d renounced forever. There’s just one problem: somewhere along the way, she lost the power and the magic that used to be hers at the keyboard. She needs to get them back. Now.

It’s not so simple, of course. One after another, escalating issues arise that Susannah could have never foreseen. Worse yet, she learns that she has a progressive hereditary disease that’s making her fingers cramp and curl—a curse waiting in her genes, legacy of a birth family that gave her little else. As her now-or-never concert draws near, Susannah is catapulted back to memories she’s never been able to purge—and forward, to choices she never thought she’d have to make.

There are so many scenes in the book that depict Susannah playing the piano or seeing the world through the eyes of a musician.  How did you get in the head of a pianist so well?

I’m what’s known as a “serious amateur” pianist—“serious” because I study with an amazing teacher, and “amateur” because I do it purely for the love of the piano, having returned to it after a long absence. The secret to THE SOUND BETWEEN THE NOTES is that I had to become a better musician—not necessarily a better writer—before I could make the book what it needed to be!  In the early drafts, Susannah was much too brittle and angry, and the story just wasn’t right.  It wasn’t until I got deeper into my own connection with music that I understood what was wrong with the way I’d depicted her: no one can be bitter and play the piano the way I wanted her to play! That was a huge breakthrough for me, and a real turning point in my writing journey.

I’ve now played nearly all the pieces mentioned in the book, so I wrote about them from experience—with the exception of the Schubert sonata that frames the story and is, mostly, beyond my ability. However, I set myself the goal of learning the second movement before the publication date, and I’m happy to say that I’ve achieved it!

Do you think Susannah’s longing for connection (to her birth mother, her husband, her son, her father, her mentor) stems from being adopted, or is it part of human nature?

I do think the longing for connection and belonging is an essential part of human nature. We all want to know where we come from and where we belong. Think of the popularity of resources like Ancestry.com and 23-and-me! They’re just the latest technological version of a yearning for roots that’s always been part of human culture—the way we have family traditions, special dishes, naming rituals, as ways to affirm who we are and where we fit.

And yes, it’s more complicated for those who were adopted, because they belong to two separate lineages—nature and nurture, adding different components of one’s identity. In THE SOUND BETWEEN THE NOTES, Susannah understands that she got her musical talent from her birth mother, but her drive and determination from her adoptive mother. She’s lucky, because the two lineages support one another, but it isn’t always that way. As a mother by adoption myself (twice), I’m well aware of how complex this can be and how each adoptee has to forge his or her own path.

What was the most important thing you learned as a writer, in creating Susannah?

In early versions of the story, as I mentioned, Susannah was rather brittle, defensive, and angry.  I had the idea that she had to start out that way in order to have an arc of emotional growth—but I was so wrong!  Characters can be good people who become better people because of what they struggle with, endure, and come to understand.

By making Susannah kinder and more loving, I understood that I needed to make all my characters more lovable. I needed to listen to them, feel their humanity, and find the thing in each of them that’s worthy of love and respect. That has been a very profound shift in me.

What do you hope readers will take away from the book?

The first word that comes to mind is hope. Although Susannah does have a second chance for the very thing she renounced when her son was born—and she might (or might not) achieve a level of professional success that she never thought possible—I don’t see that as being the essential hope that the book offers. Rather, I think it offers hope for the healing, connection, and sense of belonging that are so essential to the human experience.

I’d also say that THE SOUND BETWEEN THE NOTES is about embracing everything we are—and everything that’s made us who we are. So the other message it offers is about integrating all the influences we’ve received, bringing together nature and nurture.

Can you share a few “behind the scenes” facts that we might not know about THE SOUND BETWEEN THE NOTES? 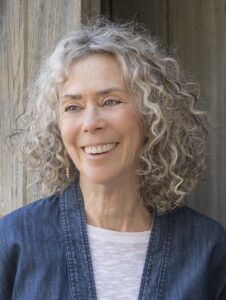 Barbara Linn Probst is a writer of both fiction and non-fiction, living on an historic dirt road in New York’s Hudson Valley. Her debut novel Queen of the Owls (April 2020) is the powerful story of a woman’s search for wholeness, framed around the art and life of iconic American painter Georgia O’Keeffe. Endorsed by best-selling authors such as Christina Baker Kline and Caroline Leavitt, Queen of the Owls was selected as one of the 20 most anticipated books of 2020 by Working Mother and one of the best Spring fiction books by Parade Magazine, and a debut novel “too good to ignore” by Bustle. It was also featured in lists compiled by Pop Sugar and Entertainment Weekly, among others. It won the bronze medal for popular fiction from the Independent Publishers Association, placed first runner-up in general fiction for the Eric Hoffer Award, and was short-listed for both the First Horizon and the $2500 Grand Prize. Barbara’s second novel, The Sound Between the Notes, is slated for publication in April 2021. Like Queen of The Owls, it shows how art can help us to be more fully human. Barbara has also published numerous blogs on the craft of writing on award-winning sites such as Jane Friedman and Writer Unboxed. To learn more about Barbara and her work, please see //www.barbaralinnprobst.com/. She resides in New York.