Stewart Lewis is a multi-talented artist. A singer-songwriter, his music has been featured in television and film, and he’s toured with artists including Sheryl Crow and Shawn Colvin. His writing career has been noteworthy and prolific so far as well. His sixth novel, One Stupid Thing, is a coming of age YA, with a healthy helping of mystery and suspense. A momentary lapse of judgement, or one stupid thing, changes everything for three teens summering in Nantucket. But, when they realize all was not what it seemed the night in question, they’re determined to learn the truth. I’m so pleased to chat with Stewart Lewis today, about his latest page-turner more. Welcome, Stewart!

Tabitha Lord: Which came first, the music or the books? Can you talk a little about how your artistic career has evolved? 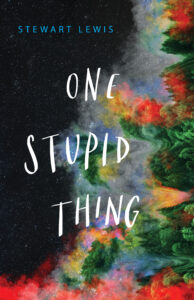 Stewart Lewis: Music came first. My parents were in a bluegrass band so someone threw me a tambourine when I was like, two. I was in a band and performing solo through most of my teens and twenties. After college, I fell in love with reading. Armistead Maupin, Stephen McCauley, Raymond Carver. I had written some stories but really wanted to practice the craft. I got my masters in writing at USC and published my first novel four months after graduating.

TL: The older I get, the farther away from my own young adult experiences I feel, yet some of my favorite reads have been YA. Partly, I think there’s an intensity to that time in our lives which just makes for good storytelling. Why did you choose to write YA fiction, and what do enjoy most about it?

SL: I love the immediacy, and the fact that what happens to us then can change the course of our lives. I also love the drama, how a character can get a pimple and suddenly the world is ending. In my second novel, my agent told me I really nailed the teenage character, and suggested I write YA, as it’s such a huge market. Best advice I could have gotten, as I went on to write my fist and most successful YA novel, You Have Seven Messages.

TL: One Stupid Thing is told from four separate points of view. Would you give us a quick character sketch of each of the teens, and discuss your choice to use multiple POV’s?

SL: I feel like the multiple POV’s give the story more depth and lenses to see through. Jamie is the shy, writer type who is testing the waters of his sexuality. Trevor is the hot surfer type who comes from money but not a lot of  love. Sophie is the smart, practical type who is coming out of her shell. Violet is the mysterious, creative type who has a dark past.

TL: I love Nantucket! Why did you choose this particular backdrop?

SL: I have a house there and have been going for fifteen years. It’s one of the most beautiful places in the world, and I’d always wanted to set a book there – someone had described One Stupid Thing as “atmospheric” which I feel is apt. I hope I did it justice.

TL: Are you currently working on another manuscript? We’d love a sneak peek!

SL: I’m working on several projects, including an adult novel called The Big Day, also told from four perspectives, taking place over the course of one day at a wedding in Rhode Island. The tag line is: A small wedding with big secrets.

TL: Well, as a Rhode Islander, I’ll look forward to that! Thanks so much, Stewart.

Stewart Lewis is the author of six previous novels, including You Have Seven Messages, which has been translated into five languages. He is also an acclaimed singer-songwriter who has opened for such artists as Shawn Colvin, Graham Nash, Better Than Ezra, and others. He lives in Nashville, Tennessee, and Nantucket, Massachusetts.