Rob writes funny things. His anti-self help book Unleash the Sloth! sits on my coffee table, where I’ll open it to some random page for a good chuckle. His novels are smart, laugh-out-loud science fiction adventures with lovable characters and whacky plots. I met Rob on a panel at a writer’s conference, and he is as intelligent, funny, and interesting as his books! And his writing journey proves that there are many ways to access the literary world, meet your audience, and navigate the publishing industry. I’m so pleased to welcome Rob Dircks to BCB today!

Tabitha Lord: Tell us a little about yourself, and how you went from business owner – of an award-winning ad agency – to writer.

Rob Dircks: To make a really long and winding story not so terribly long: I was the only kid in school with a Super8 camera, making goofy movies with my brothers. But I didn’t think that could be a “real job,” so I went into marketing instead, then graphic design and copywriting, and joined my brother for a twenty-two year (and still going) adventure in advertising with Dircks Associates. Then, about five years ago, I decided to take some screenwriting classes at NYU and get back to my movie roots. I loved the form, and learning narrative writing, but the idea of throwing my scripts on top of never-ending slush piles in studios out in L.A. turned me off. So I said, “Hey – with this new self-publishing world, maybe I can sell directly to readers, and see if they like it.” And they did! And I did! I LOVED the whole process – not only the writing, but the design, packaging, and marketing. It was a whole new world. So now I’m hooked, and fashion myself not only an author, but also a little cottage publishing house.
TL: I’m a big fan of laughter as an antidote for almost anything. When I’m having a bad day, I find a reel of Star Wars bloopers or autocorrect mishaps and laugh myself silly – often all alone. Your book Unleash the Sloth!, has officially made it onto my “laugh resource” list. Where did the idea for Unleash the Sloth! come from and how was the experience writing this book different from crafting your novels?
RD: Unleash the Sloth! was my first experiment in self-publishing. For years, I had noticed myself looking for ways to get more done with as little effort as possible (or to do absolutely nothing and appear to be doing something productive.) I just kind of kept a list, and eventually fleshed it out to that book. Having been an avid self-help reader at times, I loved the idea of gently poking fun at the self-help thing, and basically telling people “you’re fine the way you are, and you can probably get away with doing even less.”
The experience was so much different than the novels – Unleash the Sloth! was basically a string of jokes with a common theme, whereas novels are actual stories, with plots and character arcs, and inner goals, and all that fun stuff. I find the novels so much more satisfying, I’m not sure I’ll do another joke book. Although now that I think of it, I’ve had a title for another anti-self-help book stuck in my head for years: Aim Low. You like it?
TL: Let’s talk about the novels Where the Hell is Tesla and its newly released sequel, Don’t Touch the Blue Stuff. Where did you come up with the idea for these stories? 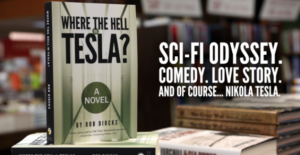 Rob Dircks is the Audible bestselling author of Where the Hell is Tesla? and The Wrong Unit, and a member of SFWA (Science Fiction & Fantasy Writers of America). His prior work includes the anti-self-help book Unleash the Sloth! 75 Ways to Reach Your Maximum Potential By Doing Less, and a drawerful of screenplays and short stories. Some of these sci-fi short stories appear on his original audio short story podcast Listen To The Signal. Rob helps other authors publish their own work with Goldfinch Publishing, and he writes and designs for the award-winning ad agency, Dircks Associates, that he owns with his brother.