Before Covid essentially shut down the convention circuit, I had the pleasure of sharing a booth at Richmond Galaxy Con with John Jackson Miller. In the Star Wars writer’s universe, John is a legend. Seriously, signed copies of his books sold like hotcakes and fans recognized him at dinner. He also happens to be a really great guy who agreed to this interview.

I recently read his novel, Star Wars: Legends – Kenobi, and we’ll definitely talk about that fantastic story here, but I opted to broaden this interview because there were so many questions I wanted to ask him! You may have deduced that I am a total fan-girl…

Tabitha Lord: John, thank you so much for chatting today. When writing in such a well-established universe such as Star Wars, how do you balance developing your own unique story with the expectations and parameters already in place?

John Jackson Miller: The key is always to remember that you are telling a story, and that it needs to work as one regardless of the particular sandbox you’re playing in or the toys you get to use. You’re not there to connect dots, to tie existing stories together; you have to have something to say. This is true of all licensed fiction work, not just Star Wars.

You also aren’t there just to retell the story from the movie, TV show, or whatever that you’re writing about. Your work shouldn’t be a Mad Libs version, with one generic Jedi, one generic Sith, one planet-destroying weapon, and so forth. My Kenobi novel was proposed as a western; its lack of space battles and lightsaber fights automatically gave it a different feel. But the thematic matters in the book were core Star Wars, so it all worked out.

Working in licensed fiction always involves a certain level of air traffic control; you have to be aware of where the fixed obstacles are and what other projects may be in flight that could cross paths with yours. But the folks on the editorial and licensing teams are very good about alerting you to all that.

TL: Many of our readers on BCB aren’t familiar with what ‘canon’ means with regard to particular storylines. Could you give a brief explanation?

JJM: Canon of course comes from religion, but it reaches the science fiction fan via Sherlock Holmes, whose readers a hundred years ago began using the term as they tried to put Arthur Conan Doyle’s stories in order, making sense of things like Watson’s seemingly multiple marriages.

For years in licensed fiction, there was no assumption that the stories in comics and novels would have any impact on the stories of the character in the source medium — movies, TV, or whatever. Often the events in the novels and comics weren’t consistent with each other, either. But as fandom grew and the market for such stories became more sophisticated, a desire for consistency grew — and eventually we got to where we are today, when licensors are promoting the idea that what happens in novels and comics “counts” in their screen characters’ lives.

My Star Wars: A New Dawn novel in 2014 marked the start of novels being considered canonical for Star Wars, but that doesn’t mean that everything that came before is irrelevant. It’s branded as “Legends” because some parts of legends can be true — and indeed, we do draw characters, ideas, and locations from them quite often. 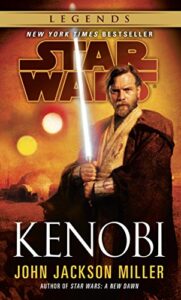 TL: I just finished reading Kenobi, a book focused on one of my favorite Star Wars characters. The story is set after Luke and Leia’s birth. Obi Wan, now known as Ben, has delivered baby Luke to his extended family on Tatooine and will be looking after him from afar. Did you suggest writing about Ben, or was it offered to you? Is there another character you’d like to write about, in any universe?

JJM: The concept came from me — I literally wrote my editor suggesting “The Ben Kenobi Western” in my subject line. But it wasn’t originally going to be a prose novel — that pitch was to my comics editor, for a potential stand-alone graphic novel. As the story developed, however, I realized it was much more extensive than could appear in that format, and so the idea was shelved. It would be six years before I would take it up again, this time as a prose novel.

As to other characters and universes, I’ve been fortunate in the number of stamps on my passport. Last year, I had books out for Star Wars, Star Trek, and Battlestar Galactica, which is pretty much the trifecta for eleven-year-old me. There are still characters in each I’ve never written — Han and Lando in Star Wars, Data in Star Trek — and then there are a lot of licenses that’d be fun to do something for.

I must admit that a lot of what appeals to me in that regard might not be very commercial, though: I love the Max Headroom TV series from the 1980s but I don’t know who’d want to read a book about it!

TL: Can you give us a little insight into your creative decision making? For example, you chose to explore the history of the Tusken Raiders, or Sand People, in the Kenobi book. Why this focus?

JJM: The Tuskens are part of the environment on Tatooine that Obi-Wan has moved to. The settlers on the planet are trapped between many dangers: the harsh climate, Jabba’s mobsters in town, and the local wildlife — and then there’s the Tuskens, who consider the planet theirs as well and who express that in violent ways. They had to be a part of any story.

To an extent, their history had been explored before in a Star Wars comics storyline called “Outlander” — and setting my story where I did, I knew I had to deal with it. I worked, though, to elaborate where I could, providing them with a mythology that explained why they lived in such a horrible place. And while I don’t think we consider them enlightened at the end — there is no peace to be had with them — we at least understand a little more of what motivates them.

There’s a lot more about the process behind Kenobi here.

TL: When writing in an established universe, you have to deal with fan expectations on a whole different level than most authors. What’s been one of your best experiences with fans, and what’s been the worst?

JJM: The bad experiences are mostly no different from the ones you’d have on a work of any kind — it’s just you’re more likely to stumble across them because there are so many forums devoted to the franchises.

But a thing you don’t have to deal much with in an original story world is that people have often written their own stories, mentally, about what should happen to the characters: ‘head-canon’ is a thing you often have to contend with. But as I was advised by a fellow author when I started out, you’re the one telling the official story, and you can’t surrender that control.

The good experiences have been many. Seeing people in costume as your characters, designing action figures of them, even naming pets and children after them — these are all very cool moments. There are costumers who recreate my book covers and scenes from the comics. I’m in awe of the time they put in and humbled that they’re willing to do it.

TL: As mentioned earlier, not only do you write in the Star Wars universe, but Star Trek as well. I won’t ask you which is your favorite, because that just wouldn’t be fair! But, would you talk a little about your upcoming summer release? 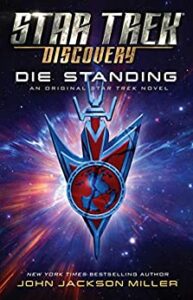 JJM: On July 14, Star Trek: Discovery – Die Standing releases from Gallery Books in paperback, audiobook, and ebook — and it stars a fascinating character: Emperor Georgiou, leader of the evil Terran Empire from the Mirror Universe in Star Trek, who’s been forced to take refuge in our continuum. On the show, she’s recruited to serve as a spy for Section 31, the shadowy espionage organization; there’s a TV show starring Michelle Yeoh on the way that’s about that.

Die Standing, though, is about her first weeks in our universe — and the time when she’s deciding whether she wants to work with anyone at all. Why be a spy for someone else when she can just recreate her old empire here? And so her first mission for Section 31 — which involves some familiar faces, including an earlier incarnation of Dax — is very much a thing where she’s always working for herself, looking for chances to reclaim all that she’s lost.

In a sense, it’s my most Kenobi-like Star Trek novel, in that the protagonist is in a new environment and must come to terms with her new role in the universe before going on. She may lack a Jedi’s inner peace and wisdom, but she’s extremely smart, so it’s interesting watching her reach her decisions in the book.

As with my Scribe-nominated novel from last year, The Enterprise War, you can understand it even if you’ve never seen the show. There’s more about Die Standing here. And readers can find me on Twitter at @jjmfaraway.

TL: Thank you so much, John! I can’t wait to dig into your Star Trek books.

John Jackson Miller is a New York Times bestselling author. In addition to novels, he also writes comics, games, and nonfiction works about those things. His book Kenobi won the 2014 Scribe Award for Best Original Tie-In Novel – Speculative Fiction. His latest novel, Star Trek: Discovery – Die Standing, will be released on July 14, 2020. You can learn more about John by visiting his website at www.farawaypress.com.