Mina, a London-based travel writer, returns to her family’s home in Sardinia to bury an aunt. With her mother also gravely ill, she worries that her family’s history will be lost as the last of that generation passes away. Desperate to uncover the mystery behind her aunt Carmela’s untimely disappearance in the 1950’s, Mina digs into the past to uncover the family’s carefully hidden secrets.

It’s 1952 in post-war Sardinia. Carmela Chirigoni, a farmer’s daughter and talented seamstress, is engaged to the possessive Franco, son of a wealthy local family. Carmela believes she wants a traditional life, caring for her husband and home, and raising their children. But when she meets Captain Joe Kavanagh, an American army officer stationed nearby, his modern sensibilities challenge what she imagines for herself, and her deep feelings for him call into question her engagement to Franco. If she follows her heart, she will cause her family great strife. If she doesn’t, she may sacrifice her own future happiness and fulfillment.

With her debut novel, Under a Sardinian Sky

, Sara Alexander weaves a mesmerizing tale of love and loss, courage and heartbreak, and gracefully explores the complexities of long-held family secrets. With stunning

descriptions and an eloquent voice, Ms. Alexander’s tale will pull readers in and hold them captive until the very last page. I’m so pleased to welcome Sara Alexander to BCB today.

Tabitha Lord: Thanks so much for chatting today, Sara. I read your book while traveling in Europe, and it was just the perfect story to percolate in the back of my mind! The sense of place in Under a Sardinian Sky is so well developed that readers can feel the ocean breeze, smell Carmela’s cooking, and imagine every detail of the kitchen, the church, and the seaside villas. How much time did/do you spend on the island? And what type of research did you have to do in order to reconcile the Sardinia of today with the post-WWII version?

Sara Alexander: I spent all my childhood summers on the island. Literally leaving London the day after school ended and not returning till 6 weeks later when school resumed. Most of the stories that have been woven into Under a Sardinian Sky are in my marrow from years of hearing them retold over dinner tables. The post-war Sardinia is the most vivid certainly for my mother and her sisters as that was their childhood. I spent many hours listening and drilling the women of my family for all the gory details, which they retold with pleasure. Of course, I did a lot of other factual research of the time as well.

TL: The Chirigoni family was so real to me. I’m of Italian-American descent, and every character felt familiar – from Carmela’s hardworking, fiery father, to her cranky, demanding Nonna, to her prideful fiancé. Each personality is woven into the tapestry of the story with such authenticity and color. Of the minor characters, whom did you find the most interesting?

SA: I’m drawn to Antonio a great deal. It felt very important for Carmela to have a close friend who was male but not a romantic attachment. Antonio provided this, and also the fact that he harbours the burden of his own secrets made them compatible, drawn together for being able to guard their privacy.

TL: Carmela herself is a multidimensional character, and her journey reflects a challenge that many women of her day faced. I’d argue that some of us still face it today! On the one hand, she is truly devoted to her family, her home, and their traditional values. On the other hand, she longs to stretch herself and live a life that fulfills her own dreams and potential. We see this side of her when she learns English fluently, and in her determination as a skilled seamstress who will eventually take over the business. Of course, it is most evident in her relationship with Franco. She attempts to convince herself that their marriage will be strong and satisfying because it represents everything she though she wanted for herself. But what she feels and experiences with Joe is so much more. Did you intend this as a central theme around which you built Carmela’s story?

SA: Absolutely. It’s the crux of the story: what Carmela thinks she wants, thinks she ought to strive for, and what her true path is. I believe it’s something people deal with on a daily basis. And, in particular, it’s a dilemma that women face harsh criticism for. Often, when a man makes a decision, to sacrifice a great deal for love, he is viewed as heroic. When a woman does this, in Carmela’s case at a great cost, it can be viewed as selfish, or weak.

TL: When Carmella is acting as Joe’s translator, you brilliantly showcase her intelligence and depth. She knows just when and how to subtly manipulate conversations to relay meaning but keep the peace. I find this to be a metaphor for a skill many women have developed, especially in more traditional cultures. Do you agree?

SA: Absolutely, and I’d argue that it is a skill that a lot of women rely on in cultures that appear to be less traditional too. It was important for me to showcase Carmela’s intelligence in this way, especially with my understanding of Sardinian culture and how tricky it can be for outsiders to truly ingratiate themselves into that society. It also serves to highlight how sensitive she is to understanding many points of view simultaneously. In the end, this is what presents her tragic choices.

TL: I recently read another post-WWII novel and I was struck by a theme that both books share in common – secret keeping. As a writer myself, secrets provide depth and color to storytelling. And personally, my family has held onto a few interesting secrets from that same generation. But this is such a foreign concept in today’s world where very little is kept private. In Under a Sardinian Sky secrets linger, from Zia Rosa’s pregnancy to Carmela’s final decision. Years later, after an aunt passes away and while her mother suffers from cancer, Carmela’s niece Mina sets out to learn the family secrets. In your mind, what drives Mina’s obsession?

SA: I think Mina is the figure who is able to exorcise the memories of Carmela’s life. Nowadays we do appear to have fewer secrets, but in truth, our internet lives are a fraction of the spectrum we’re feeling and doing in any one day. Perhaps one could argue that we have more secrets nowadays because we are encouraged to display so much. Our brittle veneer of openness can never replace the courage needed to be open with people, face to face. By necessity does this not lead us to more editing/hiding? For Carmela, secret keeping is her only way of preserving a space which belongs only to her. Small town living in 1950s Sardinia presented huge challenges in terms of personal freedom!

TL: Let’s talk about you for a minute. What was the impetus for writing this book?

SA: My family. All the strong women from whom I’ve descended. The silences I’m drawn to tear apart within that clan. My late aunt, Carmela, a woman I never met, but from a lifetime of hearing stories about have come to feel a deep connection with. Her untimely death at age 23 resulted in years of anguish for my grandparents and was the impetus for her siblings to leave Sardinia for London. I feel indebted to her on some level, morbidly perhaps, for my own life. Her tragedy was to change the course of my mother’s and her siblings’ lives forever.

TL: What was the journey like from actress to writer? Is the discipline needed to write a novel similar to what’s required when you prepare for a role?

SA: Absolutely. You need to be mutable, empathetic, thorough, thoughtful, open, instinctive and tap into a critical mindset when needed, but at the right time so as not to impede your creativity. It’s a privilege as a writer, to see the world through so many different eyes though, rather than one character.

TL: Do you have any other writing projects in the works?

SA: Yes! I’m delighted to have signed a further two-book deal with Kensington. I’m just over halfway through my second novel which is set in Positano on Italy’s Amalfi coast and spans several decades.

TL: Thank you so much, Sara, and best of luck with future projects!

SA: Thank you for inviting my contribution! 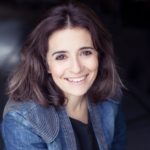 Sara Alexander graduated from Hampstead School in London and went on to attend the University of Bristol, graduating with a BA honors in Theater, Film, & TV. She followed on to complete her postgraduate diploma in acting from Drama Studio London. She has worked extensively in the theater, film, and television industries, including roles in much-loved productions such as Harry Potter & the Deathly Hallows, Dr. Who, and Franco Zeffirelli’s Sparrow. Under a Sardinian Sky is Sara’s debut novel.