Matriarch Madeline Starling killed herself. Now she’s in purgatory, hovering above the earth. She watches her husband and teenage daughter, sending them kind thoughts to help them deal with their grief. Determined to find her own replacement before her time runs out, Madeline guides a local elementary school teacher into her husband and daughter’s path.

Brady and Eve are devastated by Madeline’s death and unsure of how to interact without Madeline’s mediating influence. As they mourn, they struggle with building a relationship on their own terms, and how to not feel responsible for the fact that Madeline must have been secretly miserable.

Told from three different perspectives, I Liked My Life is a psychological mystery, and an insightful meditation on grief and relationships. The love and resilience of the characters creates an ultimately uplifting read, despite the heavy topic.

We’re delighted to discuss I Liked My Life with its author, Abby Fabiaschi.

Kelly Sarabyn: Madeline felt like a real person, even though we only meet her in the afterlife, when she is “hovering” over earth, observing her husband and daughter. I had the same feeling when reading the Lovely Bones, which was also about a person who had died but was still watching her loved ones on earth. What drew you to incorporating the afterlife into your story, instead of, say, just telling the story from the perspective of the people left behind? Madeline is able to send thoughts to her loved ones, which they receive as feeling like she is communicating with them, but they stopped short of believing she was a ghost actually speaking to them. Do you believe there might be an afterlife where spirits can still communicate with people on earth or is this pure fantasy?

Abby Fabiaschi: I do feel as though I get guidance from loved ones who are no longer physically here; a supportive chill during an intense bout of solitary thought or a memory that pops to mind with a germane message. Is it real or does my mind concoct these moments the way it makes my head itch when I hear the word lice? I honestly don’t know. But these spiritual trysts ease my pain, comforting me in a way the grounded world cannot, so I no longer question their authenticity. I suppose I’ll uncover the truth when I’m on the other side of the fence. 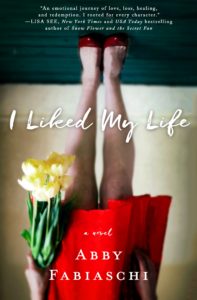 KS: After her mother dies, Eve rejects her boyfriend and all her friends. She can’t relate to them and their petty concerns, and they don’t say the right things. Most of what we know about Eve before her mother’s death is colored by the hindsight of her guilt, so we can’t quite see what the substance of these relationships were. In your mind, did Eve have any true friends prior to her mother’s death or was she caught up in a superficial crowd? Were Eve and her mother going through a period of separation?

AF: I didn’t consider Eve’s high school crowd universally superficial; they were a product of their age. Teenagerdom is a selfish period for most, an ailment usually cured with time. Tragedy forced Eve to mature quickly, removing her ability to connect with peers. She sees a bigger picture and is unable to go back to looking at the smaller one.

Yes, Eve’s predictable struggle for independence had already altered her relationship with her mother, but it was Maddy who felt the brunt of that shift. Before tragedy struck, Eve viewed the widening distance between them as a rite of passage. Maddy saw it that way too, but it left her day-to-day with a void. She had faith her daughter would grow into an insightful, engaged adult—validating her life’s work—but Eve no longer requiring constant attention forced Maddy to consider how she would fill her remaining decades.

KS: One of the big themes in the book is a woman’s decision to leave the workforce in order to take care of her children. Madeline chooses to do this, even though she was very ambitious in her career prior to having her daughter. Madeline loves raising her daughter, but she, Brady and Eve all grapple with whether Brady and Eve took Madeline’s caregiving for granted. How do you think society impacted Brady and Eve’s failing to recognize all that Madeline did—does society not properly value the unpaid work of caregiving, which is still predominately done by women? How have these judgments evolved over time? Madeline’s own mother stayed at home, but Madeline says, as she was doing so, it “became passé. All her friends got jobs … the community no longer held her blind familial devotion in high esteem.”

AF: I didn’t set out to explore society’s values as much as the additive cause and effect of the life decisions made inside a single household—the if this, then thats that ultimately make up our accomplishments and regrets.

For most of the women I know intimately, it doesn’t matter whether they “lean in”—juggling a career and family—or stay at home: we all carry guilt. The leaners are on a treadmill running hard, sprinting the length of a marathon, but at the end of the day there’s a sense that both their audiences—colleagues and family members—are disappointed. It’s a curse, the old Jack of all trades, master of none quandary. The stay-at-homers are expected to have this permanent gratitude that they don’t need to work, even though they work tirelessly, selflessly, fretting about their self-worth without a paycheck and agreeing to obscene amounts of volunteer assignments because what will people think if I say no when I don’t have a day job? There’s an unfair pressure for their home life to be perfect, after all they are so “lucky.”

KS: How was Madeline and Brady’s relationship affected by their chosen division of labor? Did Madeline crowd Brady out from caregiving in order to compensate for her own insecurity that she was “only” taking care of Eve and the house? Do you think Brady would have been more domestic and communicative if Madeline had also kept her demanding career?

AF: Honestly, no, I don’t. I married a man who helps with the laundry and takes out the trash. I cook; he cleans the kitchen after. We are a team. But when we had children, the balance tipped. He’s an engaged parent, as on it as any father I’ve observed, but I manage the kids’ doctor’s appointments and our childcare needs and the flow of schoolwork and sport registrations. I make sure they get 5 servings of fruits and vegetables and have clothes that fit and, when they’re sick, I am the primary nurse on duty. I sign the permission forms and pack their suitcases when we go on vacation and ensure they are properly sun-screened and bug-sprayed. I am Santa and the Easter Bunny and the resident birthday party coordinator. We never talked about it—my husband didn’t dump all this on me—it just happened. Maternal instincts are real.

KS: You alternate telling the story from Madeline, Eve and Brady’s perspective. We also get to read some of Madeline’s journal. What becomes clear is that life and relationships are complicated, and no one has the same exact perspective on the same events and experiences. Is differing perspectives on the same experiences something that interests you about the human experience? Is that part of the reason you chose to have three different narrators?

AF: Very much so. My father used to say, “A person’s opinion is always right.” Each experience impacts how we handle the next experience. These layers bleed into everything from our politics to our vocabulary to our patience level. We are all beholden to a backstory. Perspective makes assumptions, justifies questionable decisions, and puts us in a place of judgment. It is a living part of our personalities.

KS: Eve grows up in Wellesley, a wealthy suburb of Boston. At one point, her father expresses disappointment that she might not have realized the extent of her privileges. But ironically, this in the middle of a luxurious and very expensive trip. Eve acquires a great deal of perspective on life as a result of her mother’s death, but do you think this includes perspective on the wealth of her family? Is it likely teenagers living in wealthy enclaves can gain that perspective, if that standard of living is all they’ve ever known?

AF: Yes, Eve’s perspective on everything changes after the death of her mother—including the things she perceives as important. 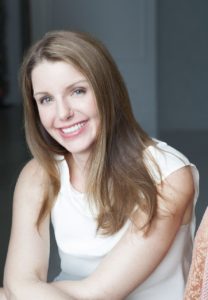 And yes, I do think teenagers who are born into a privileged lifestyle are capable of understanding and appreciating their good fortune, as long as that message is prioritized in their home. It’s important that parents lead by example, enforce open-hearted values, impart the hard work and value of a dollar, and give back to those in need. These are all things I learned from my father who sought generational improvement for his family and succeeded. With my own kids, we talk about how fortunate we are; we focus on charitable service; we discuss their responsibility to have a view that accounts for people from every demographic. But is it enough? When they grow up will they get it? I certainly hope so.

KS: I want to draw attention to the fact that you’re donating 20% of the profit from your book to charities that support women and children. Do you have a specific charity in mind, and if so, can you tell us about their work? Do you view your fiction as serving a social purpose, as well, or is your goal with writing simply to tell a good story?

AF: My only goal as a writer is to earn readers’ interest. Altruistically, I’m passionate about economic solutions to solve social and cultural problems. To date, donations from the advance on I LIKED MY LIFE have gone to Her Future Coalition, formerly Made By Survivors, an organization that has spent over a decade providing shelter, education, and high-wage employment to survivors of human trafficking and extreme abuse so that they may remain forever free. I’ve been on the board for four years, and am immensely proud of the work we do. To learn more, go to www.herfuturecoalition.org.

KS: Thank you so much.

Abby Fabiaschi is a human rights advocate and the Director of the Her Future Coalition, an international nonprofit organization with a unique prosperity model that uplifts victims from sex trafficking and extreme abuse. I Liked My Life is her first novel. Learn more at www.abbyfabiaschi.com and buy her book here.