With so many options in publishing, authors have the opportunity to mix genres and not worry so much about where to ‘shelve’ their books. Certainly, readers want to know what they’re getting into, at least the overarching category, but they’re willing to give something interesting a try. When I heard about Honor Raconteur’s upcoming release, Rise of the Catalyst, a blend of steampunk and alternate history, I was really curious how she came up with the idea for her story…

Hello, people of the internet. I’m Honor Raconteur and I like to write fantasy. No brand of fantasy is safe from me—I enjoy it all. My latest book, though, that’s a whole different style because I’m mixing alternate history with steampunk. 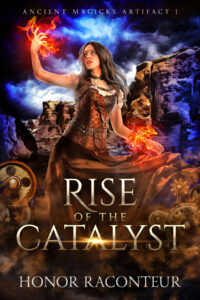 It all started when I learned about the Anasazi. They were an ancient civilization on American soil (roughly around the New Mexico-Arizona area) well before the American Indians even thought of setting foot on this land. We have no written records from them, but according to the oral histories of the American Indian tribes that lived in that area, the Anasazi were incredibly powerful. Their civilization was unrivaled, with a metropolis acting as a trading hub. What they were most famous for, though, was that they had the power to sing to the earth and move stone.

Now, I’m not sure how true that legend is, but when I heard it my author brain perked up and started wagging its tail. Singing to the stones? Ancient magic on American soil? Sounds like a plot bunny to me. I already had a character named Arwen living in my head rent-free, and I’d toyed with several ideas to give her. This one, though, this one entranced me.

A story was born.

After that was when the hard work started. The fun part of creating a story is the initial premise because you have a sea of possibilities to choose from. The not-fun part is doing the research and figuring out what you can and can’t get away with. I had set this story in 1910 America, which meant I had to largely adhere to certain rules and the quirks of the culture at that time. I did cheat a little, as my main character’s a woman and she had to move around the country, but I did try to stay true to history.

The other problem I faced was that I have never lived in that time period. I clearly had no real idea of what life was like back then. How much did things cost? How long did it take to travel from one place to another? How could I feasibly get Arwen and her team from Boston to New Mexico? I had to craft a truck that was rugged enough but also large enough to haul Arwen’s team and everything else they needed. What kind of truck would work? There were a lot of questions I had no ready answers for. I anticipated that, knew I’d have to do research, but severely underestimated how much research this would take.

That was when my old history teacher and friend, RC, came in and saved my bacon. I called him, asking what he knew of the Anasazi and 1910 America, and got him all excited. The man loves research, like me, and volunteered himself as tribute. He found answers to questions I didn’t know I’d have. All I had to do was call him and ask questions like, “Hey, RC, what kind of gun would the survivalist use?” and let him dig up the answer for me. I would not have been able to research and write this book on time without him. We both agreed, though, that for the next Arwen book, we’d definitely start researching a good six months before I started the draft. Just for the sake of sanity.

Once I had the information I needed, Arwen’s book just flew out of my fingers. I love putting magic into a realistic setting and turning things ever so slightly on its head. Rise of the Catalyst does that in spades. Plus, Arwen has a bit of a snarky side, much like myself, which made it all the more fun.

I hope everyone who reads this book enjoys it for what it is: an action-packed story set in a time of American history that we don’t learn about in school, with just a dash of magic.

About the Guest Author: Many years ago, in the hills of Tennessee, a nice, unsuspecting young couple had their first child named Honor Raconteur. Their home was slowly turned into a library as their daughter consistently brought books home over the years. No one was surprised when she grew up, went to college, and got her Bachelor’s in English. Despite the fact that she has three degrees, and looks like a mature young woman, she’s never grown out of her love for dragons, unicorns and other fantastical creatures. Her latest book, Rise of the Catalyst, will be published in May 2022.