A seamless blend of psychological thriller, family drama, and mystery, Everything We Lost follows Lucy Durant’s search to find her missing brother. A decade ago, Nolan Durant disappeared into the California desert and never returned. Lucy’s memories from that time are unreliable and hazy, but her confusion and lingering guilt drive her to seek the truth. Along the way, she must confront her broken relationship with her mother, the toll her brother’s mental illness took on the family, and her own troubled teenage years. Satisfying without losing its mysterious edge, Everything We Lost questions what we think we know about memory, belief structures, and the nature of truth itself. I am thrilled to welcome Valeria Geary, author of Everything We Lost, to BCB today!

Tabitha Lord: When I write, I generally have a central theme or question around which my story develops. Did this story begin with a theme or a question that you wanted to explore? If so, can you explain? 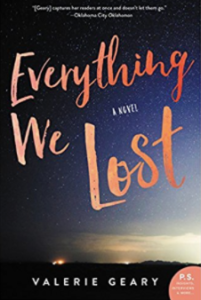 Valerie Geary: The idea for this book sparked from an image I had of a young woman staring up at the stars thinking back on a memory from childhood, a memory that involves her missing brother, but it’s a memory she’s not sure she can trust. I think from the beginning I wanted to play with the idea of memory—how unreliable it can be, especially the memories of our childhood. Are our memories real or simply stories we’ve told ourselves over and over until they become our reality?

TL: The book alternates between Nolan’s point of view, as he documents his perceived experiences with UFO’s and shares a diary of sorts with readers, and Lucy’s, as she searches for answers to her brother’s disappearance. Why did you decide to tell the story using both voices?

VG: I felt it only fair to give both Nolan and Lucy a chance to explain their version of the story. I wanted to allow readers a skeptic’s perspective as well as a believer’s, to feel that tug-of-war. Who’s right? Who’s wrong? Who’s crazy? Who’s sane? No one? Everyone? I suppose I also wanted to play again with the concept of how we remember things, how two people can experience and interpret an event so differently. Using dual narrators gave me space to show that.

TL: A major thread in the story is Lucy finding her way back to her mother, with whom she has had no contact for years. Can you talk about how the relationship between Lucy and her mom evolves throughout the story?

VG: Teenage daughter and mother relationships are naturally fraught with tension and miscommunication, but with Lucy, she has the added complications of her brother’s disappearance and Sandra’s alcoholism, so quite early on she and her mother fracture. One thing that I think is most difficult for Lucy is that at the point where the book starts, ten years after Nolan goes missing, her mother now believes in UFOs too, and in the idea that Nolan has been abducted, and Lucy has to find a way to reconcile her disbelief with her mother’s belief. You can’t just stop loving someone because you believe different things. You have to find some common ground and I think that’s what Lucy and Sandra are trying to do here. For most of the book they are each trying in their own imperfect, fumbling ways to reach out, and to figure out how to piece their relationship back together. They both feel they failed Nolan, and now they are trying to do better with the family they have left.

TL: While the reader is mostly convinced that Nolan’s UFO experiences were hallucinations, you’ve sprinkled a dusting of doubt throughout the narrative. Why?

VG: At some point during the writing, I began to delve into the idea of belief. Of why we believe the things we do, how we choose to believe in some things and not others, what drives some people to never back down from their beliefs even in the face of strong evidence to the contrary. For me, this was never a book about a boy who was hallucinating, it was about a boy who believes in truly extraordinary things and refuses to back down from those beliefs even when everyone else is telling him that what he’s experiencing cannot possibly be real. Nolan believes the UFOs are real and, if I did my job right, when the reader is with Nolan, they should believe too.

TL: You’ve managed to create a satisfying ending to this story without actually solving the main mystery. Although Lucy hasn’t found all the answers she’s seeking, she’s found a healthy way to live with her questions, and I think that makes all the difference. Can you discuss your decision not to give readers a conclusive explanation for Nolan’s disappearance?

VG: In addition to the themes of memory and belief, I also wanted to explore the idea of unanswerable questions, of unknowns, the moments in life when we have to decide whether to keep seeking answers or just let go and embrace the mystery. In some ways too, I don’t want to tell readers what to believe, I want them to decide for themselves. I have always loved the idea of books as a conversation, of the story carrying on in other people’s imaginations long after I’ve let it go.

TL: Are you working on another project? If yes, can you share?

VG: Oh yes, I am always working on something new. I have a few projects simmering, but my main focus for the past year has been a new novel about a young woman who feels responsible for the recent death of her best friend. She hikes into the Mount Hood Wilderness with no intention of ever hiking out, only to be saved by a strange woods-woman with secrets of her own who may not be as benevolent as she first seems.

TL: Thank you so much, Valerie. I look forward to your next project!

Valerie Geary is the author of Crooked River, an Oregon Book Award finalist and an Indie Next Great Read. Her short stories have appeared in Weekly Rumpus, Day One, Menda City Review, Boston Literary Magazine, Foundling Review, the UK publication Litro, and others. She currently lives in Portland, Oregon with her family. In addition to writing and reading, Valerie also enjoys gardening, hiking, sailing, and playing disc golf.