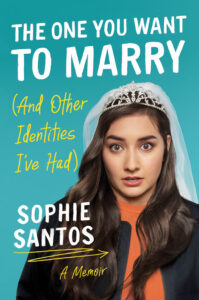 Sophie Santos is an exciting and emerging voice in comedy.  She has written for shows on Bravo and MTV and appeared on  Jimmy Kimmel Live! She can currently be heard in the new Audible Original Hit Job starring Pete Davidson and Keke Palmer and is the host of the acclaimed comedy show The Lesbian Agenda.  Today Book Club Babble is proud to interview Sophie Santos,  author of The One You Want to Marry.  Sophie, thank you so much for being with us here today.  Now, let’s get started!

What inspired you to write the book? I mean, I wish I had a book like this growing up. It’s hard enough to come out and feel secure (in an insecure world), but with lesbian content few and far between, it’s like trying to size yourself up with an accurate mirror.

Can you tell our readers what the book is about (without spoilers)? It’s a memoir about fitting in and knowing when it’s best not to. It’s essentially split up into three phases—the first is about me as a tackle football playing tomboy, the second is right after I hit puberty and then become a pageant queen and a sorority girl at the University of Alabama (Roll Tide), and the third phase is when I go through another puberty and realize I’m a comedian, oh and also gay. I will say it’s far more than a coming-out story, and it’s really about coming into your own.

What did you learn when writing the book? One of my editors gave me a quote which I’m gonna botch but that said something to the effect of, “think about the one thing you don’t want to tell people and then tell everybody.” At first I ignored those words of wisdom but then realized it was the most valuable advice in order to keep the book honest, vulnerable, and ultimately relatable.

What surprised you the most? That I actually wrote the shit that I didn’t want to write about!

What does the title mean? How did you come up with it? I don’t want to spoil it, but it alludes to my second phase when I was a sorority girl.  The subtitle is about me trying on different identities until I finally found one that actually stuck.

When did you first realize you wanted to be a writer or write this particular book? I first realized I wanted to be a writer when I was in my early twenties and I started writing and performing comedy. I never realized I wanted to write a memoir, but I will say I had a coffee with someone in the biz when I was probably 22? And I told him I wanted to break into the industry but didn’t know how. I told him my life story and he said, “there’s your answer. This is the craziest shit I’ve ever heard. Write it down.” So, it was always there, I just needed to find the right medium.

How long does it take you to write a book? I don’t know how long it takes the average person, but it took me about two years. Jury’s still out if that’s average or below average or perhaps even above?!

What is your work schedule like when you’re writing? At least writing for a few hours a day, but it’s a lot of YouTubing and then once I’m somehow watching a compilation video of all of the flirting scenes between Rachel McAdams and Rachel Weisz in Disobedience being like, “oh yeah… I should probably write something now.”

What do you like to do when you’re not writing? I love performing whether it’s standup or acting. But as far as hobbies go, I’m heavily invested in Fantasy Football.

Do you have any suggestions to help me become a better writer? If so, what are they? Write what you know! That’s always the best place to start. And follow the funny. If you think it’s funny, then at least one person does which is GOOD. This was told to me by a mentor of mine, and it’s really helped me throughout the years.

Do you hear from your readers much? I do! I get a lot of DMs now which has been fun. Everyone’s been so kind. 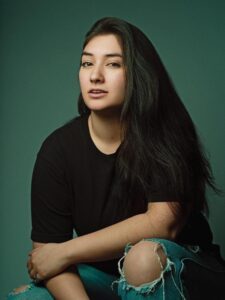 Sophie Santos is a comedian and writer based in New York. She’s written for TV shows on Bravo and MTV and currently hosts the satirical comedy show The Lesbian Agenda. Her writing has also been featured in McSweeney’s. Sophie has appeared on Jimmy Kimmel Live! and MTV News, and she has performed at the Edinburgh Festival Fringe and the Kennedy Center. Follow her on social media for lesbian propaganda. For more information, visit www.sophiesantos.com.