If you like smart, funny sci-fi with excellent world-building, a relevant theme, and a splash of romance, check out the Heartless series by Sarah Lahey. I picked up with book two, Nostalgia is Heartless, but it wasn’t problematic. Lahey reorients the reader to the world and gives enough background to catch us up without a retelling of the first story. We meet climate scientist, Quinn Buyers, while she’s living at her father’s and pregnant from a one night stand. The baby daddy is a complicated cyborg, who Quinn definitely has feelings for. To make matters worse, her famous scientist mother is missing, a solar storm threatens the planet, and her AI meerkat is depressed. The stage is set for a fast-paced, witty story with a colorful cast and an intelligent plot.

I caught up with author Sarah Lahey today on BCB…

Tabitha Lord: Welcome, Sarah! I enjoy speculative fiction, both as a reader and a writer, partly because we can examine challenging themes while 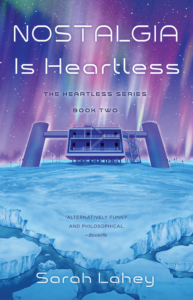 creating a bit of distance between those themes and our real-world issues. Climate change is one of those real-world issues that’s ripe for the picking. Can you talk about the themes related to this that you wanted to explore through your storytelling?

Sarah Lahey: I completely agree with you about the sci-fi genre, especially speculative fiction. It lets us discuss our concerns and fears about the future, and the effects of new technologies on our daily lives. Climate change was my initial motivation for writing the Heartless series. I’ve taught sustainable design for over decade, and in the early days I was often surrounded by skeptics. So, I thought if people read my novels, they might understand what life would be like in a world affective by rising temperatures and sea levels.

TL: As a fellow science fiction writer, I appreciate the complexities of world-building. Can you talk a little about the state of the world, the characters, and the backstory you incorporated into Nostalgia is Heartless, especially since this is the second book in the series?

SL: The book is set in 2050. In a world where automated cities, vehicles, and homes are now standard, and artificial intelligence (AI), CRISPR gene editing, and quantum computing have become a reality. Climate change is also in full swing, but there is also an optimistic edge, and in this novel carbon levels in the atmosphere are finally beginning to decline and there is hope for the future.

The main character, Quinn Buyers, is a climate scientist, who knows a lot about science but not much about herself, and the story arc for this book finalizes the storylines from Book 1. These included resolving her love affair with Tig, which initially involved a one-night stand and a subsequent pregnancy, and finding her mother, a famous scientist who is missing. She is also dealing with a depressed AI companion.

Overall, the series asks some fundamental questions about what makes us human, and it takes a light-hearted look at our relationship with technology and machines. The genre is described as science fiction meets speculative fiction with a bit of adventure and romance thrown in.

TL: If your books became a movie or a television series, who would you cast as Quinn and Tig? How about a few of your favorite supporting cast members?

SL: Oh, I love this question, and this is much harder to answer than I thought it would be.

To me, Quinn has an open, expressive face that reveals exactly what she is thinking without her having to say a word. So, Emma Stone, Margo Robbie, or the wonderful Australian actor Lulu Howes would be my choice.

Donald Glover and Daveed Diggs both have classic cyborg appeal, along with the intensity to play Quinn’s partner, Tig. And for his offsider, Planck, who identifies as gender neutral, this character requires both depth and levity so Daniel Kaluuya would be my pick.

Viola Davis has an expressive way of reading her fellow actors, and I think she would make a smart and sassy gay leader of the free world. Cate Blanchett has the perfect dry wit to play her partner and Quinn’s mother.

Timothy Simons (Jonah in Veep) has an erratic stride and great comic timing, as well as the height, to play Aaroon, the self-absorbed Transhuman.

TL: They would make an all-star cast for sure! Okay, tell us a little more about your background. When and why did you first put pen to paper?

SL: My father and stepfather were journalists, and my mother was chief-of-staff at the local newspaper. My parents often worked at home and the dining room table was their office, so my brother, sisters and I were immersed in a world of words and stories from a very young age. However, I chose a different career and I’ve been an interior designer for over 30 years. Then, several years ago I competed a degree in communication, and I knew I wanted to write, so I started the Heartless Series. I could write all day, every day.

TL: What’s on your to-be-read or to-be-watched list at the moment?

SL: Hamnet, by Maggie O’ Farrell, which won the Women’s Prize for Fiction last year. A novel where you know the protagonist will die before you even begin, but the legacy of Hamnet (Hamlet) will live forever.

Real Estate, by Deborah Levy. Having just moved into a new house to live alone (mostly) for a year, this is a topic close to my heart and Levy is a brilliant writer.

Also, two of my She Writes Press fellow authors. Fifty First Dates After Fifty, by Carolyn Arnold and So Happy Together, buy Deborah Shephard. Both are fabulous.

TL: Without spoilers, can you give us a hint what’s next for Quinn and Tig?

SL: The working title of Book 3 is Revenge Is Heartless, and without giving too much away, I can say it is another humorous, romantic adventure, but it skips ahead one generation. The book is set on the Moon, and it explores ideas about loneliness and what home means in the 21st century. It also looks at ecological ethics and the consequences of off-world habituation, along with the moral value of the environment; considering rocks, mountains, soil and water don’t suffer, do they deserve our moral concern?

TL: I’ll look forward to it! Thank you, Sarah.

Sarah Lahey is a designer, educator, and writer. She holds bachelor’s degrees in interior design, communication, and visual culture, and works as a senior lecturer teaching classes on design, technology, sustainability and creative thinking. She has three children and lives on the Northern Beaches in Sydney, Australia. Find out more at https://www.sarahlahey.com/.