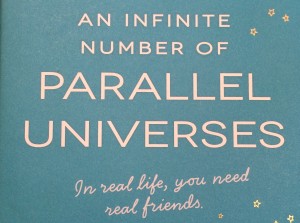 An Infinite Number of Parallel Universes is a little gem of a contemporary young adult novel by high school teacher, coach, and self-proclaimed nerd, Randy Ribay. It is a modern coming of age story told from the perspective of four high school seniors, each confronted with their own set of challenges and struggles as they face their senior year of high school. Randy deftly creates a unique voice for each character and invites us to follow them for a little while on their journey toward adulthood. You can check out Randy’s blog and visit his website at www.randyribay.com. Thanks for stopping by today, Randy!

Tabitha: None of us have escaped our teenage years completely unscathed – I think it’s the nature of this particular right of passage. But obviously some situations are more complex, and some experiences leave deeper scars. Every character in you story faces something pretty big, but I like that the end result isn’t despair. I came away feeling that these (fictional) kids were developing the tools they needed to work things out and the courage to face their promising futures. What were you hoping to convey?

Randy Ribay: I like emotionally-driven stories, so that’s what I tried to create. I knew each character was facing an emotional problem, so by the end of the story I wanted the reader to end with the sense that even though we don’t see all of them “solve” their explicit problems, they have overcome those emotional problems in such a way that they are ready to face the next phase of their lives.

Tabitha: Let’s talk craft for a minute. I liked the multiple point of view choice. I think you struck the right cord between offering different perspectives and giving each character enough depth and voice. Did you intend to write it this way, or did you start with one character and add to the mix as the story evolved?

Randy Ribay: I actually started with Sam’s section (funnily enough I ended up moving his to the last of the character sections). But as I started writing more, I became interested in his friends and wanted to explore their stories in more depth and make it into more of a story about the group instead of just one of them.

Tabitha: You are a high school teacher, which makes you uniquely suited to write about contemporary young adult issues. Were you always interested in this genre, or did your teaching experience nudge you in this direction?

Randy Ribay: I started reading a lot of young adult fiction when I started teaching so that I’d be familiar with what was out there and be able to make good recommendations to my students. After awhile, though, I just realized that I actually enjoyed YA for myself. I’m fascinated by the identity formation aspect of the teenage years, as I think most of us become who we will be for the rest of our lives during that time.

Tabitha: What feedback have you gotten from your students?

Randy Ribay: Not too much yet, actually! Not a whole lot of them have read it yet because I’m not really comfortable talking about it too much or pushing it on people. The ones who have read it told me they really enjoyed it and read it very quickly. Mostly, they just think it’s cool that I wrote a book.

Tabitha: I’m always interested in another writer’s process. Are you an outliner? How long does it take you to complete a first draft? Do you love editing or would you rather stick pins in your eyeballs?

Randy Ribay: I kind of live halfway between pantsing and plotting. I usually begin by creating my characters (like any good RPGer) and establishing their emotional problems. After I figure out what they want and how that differs from what they need, I work out a very rough idea of the plot where I plan out major moments of conflict. Then I’ll start writing and let the characters figure out how to get there. Of course, this leads to a rough first draft that needs several rounds of revision to tighten the plot and enhance the characters, themes, etc. But the more I’ve written, the more I’ve realized that that is where the magic happens.

Tabitha: I love the title An Infinite Number of Parallel Universes and I am familiar with the Star Trek episode that inspired your character, Sam, to think about the idea of multiple universes. The group of friends in Infinite bonds over Dungeons and Dragons, and there are nods to the Lord of the Rings. Your inner geek shines through your writing, my friend! But seriously, as writers, we scatter bits of ourselves – our passions, our fears, our own experiences – through our stories. Where do we find Randy in Infinite?

Randy Ribay: Definitely you see glimpses of my own interests in their interests, but you’ll also find me tucked away in the emotional core of each character. Even though none of the characters are based directly on my own experiences or modeled after me, at the heart of every character’s struggle is something that comes from me.

Tabitha: Thanks again, Randy! I’ve put this book on my teenager’s shelf.