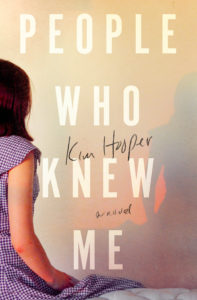 OK, so it’s not a super common occurrence, but people have been known to fake their deaths. And they all have different reasons, some are in massive debt,  facing prison for fraud or they just can’t stand the way their spouse chews their food anymore. The point is that some people feel compelled to leave their current life and start a new one. Suicide notes are left in canoes that “tipped over” and cars are “driven off” cliffs, while the “deceased” hightail it to Spain or Panama. A quick Internet search will yield dozens of real life examples of those who were caught—remember Olivia Newton John’s fiancé? He left a trail of his plans on the Internet and was subsequently busted. When 9/11 happened, Kim Hooper heard stories of people who had faked their deaths for insurance payouts, and an idea was born.

In the People Who Knew Me, Kim Hooper hooks you with the tantalizing premise of walking away from a disastrous life. It’s an idea that appeals to many who have often indulged a scenario that would make all of their problems disappear. This fantasy, for most, is fleeting, but in Hooper’s skillfully written debut novel, she explores the consequences of such a drastic decision. And if faking your death is a shot at an alternative ending to life, then Kim Hooper wrote herself a doozy.

In the People Who Knew Me , Emily Morris, the young protagonist, moves to New York, falls in love and gets married. In the beginning, the young couple was making it work; more importantly, Emily Morris was building the life she wanted. Until everything went wrong. When enormous stress threatens the young couple’s marriage (unemployment and taking in a disabled older parent) anger and resentment leads Emily to make some disturbing choices.

Emily Morris was working in the World Trade Center and had just discovered that she was pregnant when the events of 9/11 happen. Influenced by the horrors of that day and the anxiety-fueled angst of her unhappy marriage, Emily makes a decision that alters the course of everyone’s life. The people who knew her think that she is dead, while she starts a whole new life in California. Emily—now Connie Prynne—is blonde, no longer a brunette and the baby in her belly grows into a confident and well-adjusted fourteen-year-old. Connie would have been OK with living this life until she is diagnosed with cancer. Now she must confront her past to secure her daughter’s future.

It may seem like I have told you everything about the novel, but I just skimmed the surface. Readers, let me just say that this story will grip you and it will make you turn the pages to know just how, precisely, such difficult questions get answered. Book Club Babble is proud to interview the author, Kim Hooper. 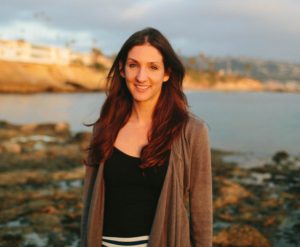 Maribel Garcia: Kim, thank you so much for being here with us today. Your novel was one hell of a ride. We know how you came up with the idea, but did writing this novel make you re-visit the fantasy that we all indulge?

Kim Hooper: Thank you for having me! Most of us have contemplated leaving behind a difficult situation at some point, but very few of us act on that fantasy in such a dramatic way. I was interested in exploring someone who did act, for better or worse. I’m pretty predictable and risk averse in my own life, so it was fun for me to write a character who takes such a big leap.

MG: What makes this novel so compelling is the way that you go back and forth between past and present. The structure of the book—alternating between Emily in the past and Connie in the present—helps readers see how the protagonist has grown.  I loved hearing about Emily’s life before she disappeared, and how she is managing as “Connie” in her new life.  What was it like to write about a character who could have done that to her loved ones?

KH: Well, I don’t necessarily agree with Emily’s choice to leave New York so abruptly, but she was very young and in a difficult situation. And I do think that the tragedy of 9/11 put her in a kind of shock. By the time she arrived in California, it was almost like there was no going back. I like writing characters who stir up some controversy. Those are the characters I love as a reader, too. I like the complexity of human nature, dark sides and all.

MG: The Emily Morris character had many flaws, but she was easy to sympathize with.  I read in an interview that you didn’t like the word “flawed,” and that you prefer the term human.  You said:

Emily is very young when she leaves New York. Admittedly, she lacks perspective on some things, as we all do when we are young.  It’s my goal to create characters who are intriguing, whether or not their choices are “right.”

I found myself torn between what is deemed as “right” and “wrong.” Did you? I mean the stress that Emily was under always seemed overwhelming. In many ways, you cannot fault this young woman for wanting to disappear. Her life sucks. On the other hand, unemployment happens, people live paycheck to paycheck and relatives move in—heck, in some countries, families cohabitate Willy Wonka style (I’m visualizing Charlie’s four bedridden grandparents), but you don’t hear them complaining. I guess what I am trying to say is that I had a lot of trouble reconciling my feelings about how much I empathized with her. Did you?

KH: Yes, I was torn with Emily. My husband and I learned a lot about caregiving first-hand (both of his parents died of chronic illnesses when they were in their fifties). Our experience was very different from Emily and Drew’s, but I still saw so many of the difficulties that could arise with that situation. With Emily and Drew, I created a worst case scenario where there was no money and no family support (they only have each other). They are both young and their communication isn’t great. I believe that if their communication was better, if they had a better perspective of their future together, they may have survived as a couple. But that doesn’t happen.

I don’t always agree with my characters, but I understand their decisions. I can see why they do what they do, even if it’s not “right.” That tension is interesting to me.

MG: I was reading your novel at the same time that I was re-visiting one of my favorite shows: Gilmore Girls.  The relationship between Connie and her daughter is so special, very much like Rory and Lorelai’s. Their relationship is unique, precisely because they only have each other.  Their lives as parent and child are so reliant on each other.  Do you have kids? The way you wrote about this relationship was so on point. What experiences did you draw upon in order to get the nuance of that kind of emotion?

KH: I don’t have kids, but I used to be a kid. I have vivid memories of the feelings of adolescence, and I have vivid memories of the push-and-pull relationship with my own mother. People ask me which character is most like me in the book and I say Claire. I relate to her most. I had to imagine how it would be for Connie, creating a life for herself and her daughter in this new place. I’ve always been drawn to mother-daughter stories. I love the relationship. It can be so conflicted, and simultaneously beautiful.

MG: In what ways have your personal experiences influenced Emily and Connie’s experiences and decisions?

KH: Well, as I mentioned earlier, my husband and I had first-hand experience with caregiving. Both of his parents died of chronic illnesses a few years ago. His stepmom took wonderful care of his father, so most of our visits with him were about spending quality time. His mother was on her own, though. My husband and his two siblings really tackled the difficulties of the caregiving. I had been so naïve about the strains of that situation. Though most people go through it in some capacity at some point in their lives, you don’t hear much about it. I hadn’t read about it in novels. When I started People Who Knew Me, I knew Emily left New York on 9/11, but I didn’t know why. I knew it was because of a very fraught family situation. It was only as I started writing that caregiving became the center of the conflict. It’s an issue that’s very close to my heart.

What I hope to show with Connie is the evolution in perspective. Emily was so young when she left New York. As Connie, she’s learned so much. She has her own health nightmare to deal with, which helps her see her past through a different lens. We tend to live our life in retrospect, and Emily/Connie shows the good and bad of that.

Kim Hooper lives in Southern California with her husband and an absurd number of pets. People Who Knew Me is her debut novel.