April is an earnest, caring, stay-at-home mom who is trying to gracefully hold everything together despite the fact she’s unraveling from the inside out. There simply isn’t enough of April left for herself or her marriage after all the demands of child-rearing, cooking, and housekeeping are met. She thinks she should be happy since staying at home was her choice to make. But, she’s stretched thin and resentful of her husband whose daily life has been relatively unchanged by parenthood. Desperate, she looks for help and finds friendship and so much more. We are so pleased to welcome Brandy to chat about her novel Adult Conversation and her modern perspective of motherhood and its demands.

Amy Wilhelm: Was Adult Conversation a natural extension of your blogs and podcasts? What inspired you to make a work of fiction about the topic of modern motherhood?

Brandy Ferner: I had been writing for media outlets and blogging for a handful of years, but the premise for this book just hit me over the head one day. I kept thinking, “How fun would it be to write a story about an overwhelmed mom who is grasping at straws, seeking therapy, and her therapist is having her own dramas, which leads them on a Thelma-and-Louise style trip to Vegas. What would two moms who are at the end of their rope actually do in Vegas – drugs, cheat, lay in bed watching TV while eating room service? And, what if Snoop Dogg was one of their neighbors?!” At this point, I didn’t see myself as an author, so I tried to decline the idea and put it out of my mind. I had a two-year-old, I couldn’t write a book! But I didn’t sleep for a week. I was up at night taking down story notes, funny scenes, character quirks, and it just poured out of me. I knew that the only way to get sleep again was to write the damn thing. So, I did. The podcast didn’t come until years later, but it’s been such a fun outlet for me as I clearly love adult conversation and real talk about motherhood.

AW: In her effort to be the primary caretaker for her two children, your protagonist April is losing herself little by little. I have a friend who has four children, and I only have one. She contends that the change from one child to two was infinitely more difficult than adding a third and fourth. Because April can remember how easy it was with her first, does she judge herself too harshly for not being able to manage two and stay sane and happy?

BF: It’s all relative – if you have one, it’s hard. If you have two, it’s hard. If you have three or four, perhaps you’ve just accepted chaos as your new way of life so it doesn’t feel as hard – haha. April doesn’t feel like it was easy with her first, but she definitely thought being a seasoned mother and having a second would make all the difficult stuff easier, such as napping (not napping), eating (not eating), never going to the bathroom alone, etc. She thought she would have figured a way out of the hard parts by the second, but instead she realizes that the only way out is through, which then has her reflecting on, “Am I broken, or is motherhood?” From the outside, motherhood didn’t look as hard as it feels on the inside, and that is what April is trying to rectify in the book. Was she lied to about the realities and sacrifices of it, or is she the problem?

AW: It seems that in our current culture both men and women are meant to do everything. A woman should take care of her own children AND do something meaningful outside the home. A man should provide for his family AND help out with the home and children in a significant way. In the end, don’t we have to stop caring about what anyone else thinks and just find out what works best for our family?

BF: My gut reaction to this is YES. And also, we are conditioned in certain ways, depending on our gender. Men are conditioned to be “over-receivers” and women are conditioned to be “under-receivers,” so I think that we each need to sit down with our spouses and unpack our set-up, and be honest about it. My only hesitation with doing “whatever works best for our family” is that’s only true if we’re really investigating the framework our family and relationship is built upon. A dad may think that the mom doing 70% of the household work is “working for their family,” and she may be conditioned to agree with him even though she’s overwhelmed. So yes, everyone has to do what works for them and tune out the outside voices, but it benefits families to also be excavating how and why their set up is the way it is, and if it’s truly working (or is fair) for both people or not.

AW: April goes to therapy to help her cope with her feeling of being overwhelmed and create some practical solutions. How much could all moms benefit by such therapy sessions whether individualized or in group learning environments?

BF: It is my belief that all moms could benefit from individualized therapy or group learning environments. But it’s hard to afford and hard to get to since getting and paying for childcare is necessary to do most of this personal work. Therapy is out there, but we don’t have built-in systems for moms to easily acquire it. But also, in my book, I wanted to show that sometimes our mom friendships are as medicinal as therapy – they are therapy in themselves.

That was what I wanted to explore with the therapist character – how is it that she has so many answers for April, yet her own personal life is crumbling? I wanted to show that we are all human, even the experts. And that’s what I wanted to write through too – a role reversal where the therapist was being supported and led by a client-turned-friend. A true, vulnerable, ride-or-die friendship is therapeutic and you don’t have to be licensed to offer it.

AW: It seems a like a cliché but even the best relationships seem to go to hell once children are added into the equation. What’s your advice to stop this deterioration before it even starts?

BF: First of all, there is no easy fix or stop gap for this, which is why marriage after kids can be such a beautiful challenge. Both things usually happen: you fall in love even more with your partner while watching them step into their new parent role, and you also have this constant bomb that you’re both managing which makes your nervous system go haywire and depletes all your energy. It’s pretty much madness. I don’t think you can really pre-plan for just how this baby is going to change things because it’s going to be different for every couple. But for me and my marriage, communication has been the key – talking about all of it – especially the hard stuff. And this can be nearly impossible when the kids are so little because you barely have time to talk (or sleep or eat). But even before the baby arrives, talking about what each others’ expectations are with household duties, childcare, and career can be a good first step, and knowing that you will likely have to reassess these things once you’re in it.

AW: I believe it’s important to remember that when raising children we are ultimately raising them to be adults. Isn’t it important to understand that sacrificing your sense of self-confidence and autonomy to raise your children disempowers them in the long run? Won’t they think they need to sacrifice themselves in the same way or they aren’t good parents? How will they learn to listen to their inner voice if we send the message that that’s not important once you’re grown up?

BF: EXACTLY! I talk about this often on the podcast and in articles (and in the book) because we modern moms get so tied up in doing everything “right,” and being engaged in everything related to our kids, that we are actually doing them a huge disservice in the long run. I think many of us are over-parenting because we grew up in the 70’s/80’s when benign neglect was so common. Many of us came home to an empty house after school and our parents didn’t help us with homework, or plan elaborate birthday parties or whatnot. So I think we’re trying to do things differently for our kids and to be more involved, but we are totally jumping the shark on this one!

We wind up exhausted and overwhelmed as moms, and our kids grow up not seeing a balanced parent who has their own interests, passions, and space. I started writing this book when my youngest was two. She had never had a babysitter before and one of the things that got me through it was knowing that both of my kids were seeing me devote time to something I loved: writing. Years later, when I got my advanced reader copies of the book in the mail, my daughter (who’s now six) took one of the books out of the box and was like, “Wow, Mom, you wrote this?!” I had this profound moment of realizing that both of my kids had seen the years of effort I put into something that was strictly for me, and how that might inspire them as future parents to do the same. By following my own path as Brandy, not just as their mom, I feel like I am somehow giving them future freedom to do the same.

AW: What do you wish for mothers who read Adult Conversation? What underlying message do you want them to hear most strongly?

BF: I wrote this book because the ideas in it wouldn’t let me sleep, but I also wrote it for all the overwhelmed, survival-mode mothers out there who don’t have the energy or mental bandwidth to articulate the entanglement that is modern motherhood. I want these moms to know that they are not broken – that if motherhood wasn’t what they thought it would be, they’re not alone. Of course, I also wanted to make them laugh while communicating this message. I felt like if I could tell a really vulnerable and relatable story that legitimately made moms laugh at their ridiculous realities – that was also therapeutic for them via April’s journey – then I did my job. 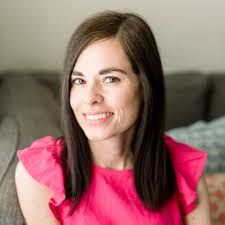 Brandy Ferner, creator of the Adult Conversation podcast, social media pages, and blog, says out loud what modern mothers are thinking. Her writing and viral posts have been featured on Good Morning America, and at HuffPost, Romper, CafeMom, and more. Brandy currently lives in SoCal, and her love language is sleep.