Advertising is not something most people think much about, even though it’s a 600-billion-dollar industry aimed at influencing our behavior. When we do think about it, it’s usually in annoyance. Andrew Essex argues that annoyance is precisely why the advertising industry is ripe for disruption. In The End of Advertising: Why It Had to Die, and the Creative Resurrection to Come, he argues that it’s just a matter of time before advertising as we know it will be swept into the dustbin of history.

It might seem like advertising has been around forever, but historically, it’s rather limited. Prior to the mid-nineteenth century, advertising was so narrow in scope it might be a stretch to call it the same name. In an era without mass communications, advertisements — if they can be called that — had to be circulated through limited prints, the town crier, or by simply having a trademark on a product. It wasn’t until newspapers were in wide circulation and someone thought to insert product ads that modern advertising was invented.

Initially, companies like Proctor and Gamble led the way in advertising, with an authentic and sincere voice. Artists were commissioned to design the visuals, poetry was written, and facts were inserted. But the advertising market was soon flooded with snake oil salesmen, advertisers who made their living by spinning tall tales about products with no real efficacy. In a time where medicinal cures were unregulated, one of the ingredients in Coke was cocaine, and even Bayer was selling Heroin (after inventing it), these types of advertisements had few limitations and they soon gave a shiny gleam of slime to the burgeoning advertisement industry’s reputation.

Because these dubious cures and medicines were regulated out of business around World War I, the advertising industry was able to burnish up its reputation. It was still influencing people to buy things they might not need, but at least these things were approximately what the advertisements were claiming. 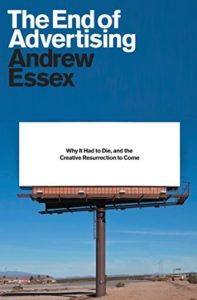 As radio and then TV reached mass adoption, advertising expanded from print to these other mediums. At first, companies sponsored and produced content on radio and TV, which kept a natural alignment between the products and the content. But by 1950s, an interruption model won out — there would be a bright line between programming and advertising. People would watch their show produced by the network, and in the middle, have to sit through separately produced advertisements.

Essex laments this turn of events because he argues – rightfully, I think – that these interruptions are annoying, especially because the advertisements don’t necessarily line up well with the content. Who wants to watch a commercial for a magic mop in the middle of a documentary about sex trafficking?

Despite the fact that most people found the ad interruptions annoying, this model prevailed for fifty years, until it was disrupted by new technologies. First there was TiVo, which enabled people to record shows and then skip the commercials, and then there were streaming services like Netflix, Amazon Prime and Hulu, which provided TV content without any commercials in exchange for a subscription fee. In radio, satellite radio services like SiriusXM also eliminated commercials for a subscription fee.

The fact that so many people are willing to pay to avoid advertisements shows that they were probably annoyed by them all along; there was just no way to avoid them before, other than not watching TV and not listening to the radio.

It is this – and, even more importantly, the invention of ad blockers on the Internet — that leads Essex to think traditional advertising is in its death throes. Though websites are plastered with banner ads, and many online video services have commercials, ad blockers mean that consumers no longer have to see these ads. Essex’s thesis is that because it is now so easy to avoid ads on TV, radio, and the Internet, traditional advertising is going to have to reinvent itself as something that consumers actually want to see. In other words, the captive audience advertisers have had for so long made them lazy. They produced bad content because they could.

I have long wondered why most advertisements seem so bad. A lot of money is spent on advertising, and still, most of it is neither interesting nor particularly informative. Essex – who was the head of an acclaimed advertising agency for ten years – agrees that most advertising is bad, but he doesn’t offer a theory as to why. He does point out that in traditional advertising, there was no reliable way to know what was working, and that certainly might be part of the problem. Without a way to measure whether your content is resonating, it’s easy to get off track.

Essex gives examples of companies that have embraced new forms of advertising, which is where he thinks companies will have to pivot if they are to flourish in the new landscape. CitiBank, for example, created a ride share program in New York City, purchasing 6,000 bikes – with the Citi Bike logo on the side – and installing them around the city for residents and tourists to rent. This cost CitiBank 41 million dollars over five years, and it brought a great deal of positive attention and goodwill to the company (as well as 6,000 mini billboards carrying their logo around the city).

Essex also points to Lego as another company embracing new forms of advertising. Lego created a feature length film that was successful both as a film and as an extended ad for the company. An ad that people paid to see because it was so enjoyable.

These examples differ from traditional advertising because they actually bring value to people in their own right, whether through entertainment, education, or in the form of a service, like providing people a bike to rent in New York City. People want – and will even pay for – these new ways of advertising. Essex argues that because ads are now so blockable from our view, advertisers will finally have to switch from providing annoying content to good content.

It would be great if Essex’s thesis were true, and it probably is to some degree, especially since many children will grow up seeing few ads (at least until they get on Facebook, or watch live sports). But even with ad blockers, digital advertising seems to show little signs of slowing down. Google and Facebook alone are predicted to make 106 billion dollars in ad revenue in 2017; total digital ad revenue is predicted to be double that. Does 212 billion dollars of digital revenue really signify a dying medium?

Numbers like these call into question the viability of Essex’s thesis. Ad blockers and publishers might be in an arm’s race, but there’s no sign the ad blockers will win, except over smaller publishers. The average person spends 50 minutes a day on Facebook so the average person will continue to be held captive to ads. Whether the threat of people leaving to other, ad-free mediums will be enough for advertisers to step up their game is yet to be seen.

I suspect advertisers will be forced to become more innovative and valuable not just because of the decreasing numbers of captive audiences, but also because of the sheer amount of entertainment and content available in the age of the Internet. This information overload makes it difficult to process and pay attention to content, especially content of low value.

Additionally, digital advertising provides a direct feedback mechanism that previous mediums of advertising never had: advertisers can track whether a person engages with their ad, or expresses interest by clicking on their link. This direct feedback might help winnow out the annoying, mediocre, and boring ads. On the other hand, it could reveal a more disturbing proposition: that annoying ads, despite being annoying, are the most effective at getting people to purchase a product. Notice how websites use bright red or orange buttons when trying to get you to subscribe or purchase something? Visually, this might not be the most appealing, but studies show it works.

Even though Essex’s thesis is likely overstated, The End of Advertising is an interesting survey of where advertising has been, and where it might be headed. Essex has a sharp, provocative wit, and that makes this book a worthwhile read for anyone who has ever been subject to an advertisement. Which, for now, is still everyone.