As holiday traditions go, we in the United States have all but ignored Santa’s creepy cousin Krampus. This horned, folkloric figure stands in stark contrast to the jolly old man in red pajamas. An inkling of Krampus’s punitive influence, amidst flying reindeer and magical elves, comes as the sanitized threat of coal in the stocking for naughty children. But there’s no real bite behind our bark. The devilish beast just isn’t as popular on this side of the pond.

Not so elsewhere. Parts of Europe celebrate the Feast of St. Nicholas on December 6th, but the preceding night, well, that belongs to Krampus. Sometimes appearing with St. Nicholas and sometimes without, Krampus takes to the streets, coal in his bag, birch switch in hand, ready to punish the wicked. For costumed revelers, Krampusnacht is an occasion for imbibing and carousing, an evening filled more with laughter than terror. But remnants of the old-world monster lurk about in the fashionable cloven hooves, goatskin cloaks, and animal horns worn by the raucous crowd. 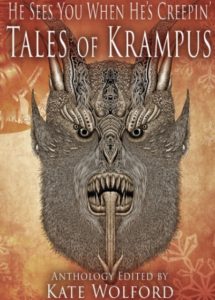 If you like your speculative fiction strange and sassy with a generous dose of scary tossed in for good measure, have a look at the latest anthology by World Weaver Press – He Sees You When He’s Creepin’: Tales of Krampus. The legend of Krampus provides a colorful backdrop for the unique stories in this anthology. From old world legends to modern retellings, from the whimsical to the wicked, the humorous to the horrible, there’s something for everyone in Tales of Krampus. Grab a cup of eggnog, with a splash of rum, and enjoy editor Kate Wolford’s collection of twisted holiday tales!

Kate Wolford is a writer, editor, and blogger living in the Midwest. Fairy tales are her specialty. Previous books include Beyond the Glass Slipper: Ten Neglected Fairy Tales to Fall in Love With, Krampusnacht: Twelve Nights of Krampus, and Frozen Fairy Tales, all published by World Weaver Press. She maintains a ‘zine, Enchanted Conversation: A Fairy Tale Magazine, at fairytalemagazine.com.