Kevin Moore’s first full-length novel The Book of Souls will be released on March 8th. While it is a work of fiction, Kevin has had some powerful supernatural experiences in his own life which have touched his soul and certainly influenced his writing. Read on for Kevin’s account of a particularly poignant encounter, and don’t forget to check out The Book of Souls when it releases next month.

In my new novel, The Book of Souls, the main character Jack Kelly is immersed in supernatural events when he wakes up in 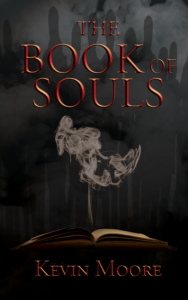 the hospital after a near death experience. Not only is he shocked to be back in the eighth grade living with his widower father, but his clearest and most immediate memories are filled with the love of his life Katherine and their three children. If that isn’t evocative enough, he now sees and hears dead people, ghosts, shadows, and demons. Now, most of us would not want to take on that level of supernatural. However, if we are open to it, we can experience the beautiful and poignant supernatural in our everyday life and in our nightly dreams.

I have had many supernatural experiences. They come in the form of lucid dreams, music, and many other serendipitous ways. The key is to turn on that light, to be open to that voice and part of you. I’d like to share one that has great meaning for me. It came in multiple parts, but it was one amazing experience from the other side.

My sister died suddenly and with multiple unsettled relationships in the wake of her death. I will call her Eileen, although that is not her actual name. Eileen and I were very close growing up in New York City and early in our life we had a very strong bond. People thought we were fraternal twins, although I am older by two years.  We looked as much alike as any brother and sister could with dark hair and blue eyes. Eileen and I also loved the paranormal, the idea of ghosts – friendly or otherwise. The little unexplainable moments, the idea that the departed could leave a little dust or energy behind. Her sudden death left me in complete sorrow. It rocked me.

I am a lucid dreamer, and she came to me in many dreams after she died.  I asked her if she had seen our mother, father, and brother. She said, “Not yet, I am not quite finished here.” Of course, I understood why she wasn’t ready – she had unfinished things with her child whom she loved deeply, but who was estranged at the time of her death.

My sister was the “tea” lady – my wife and I took her to High Tea, bought her tea pots, tea cups and many exotic teas as gifts over the years, which she loved. I have lost many people, parents, brothers, cousins, high school friends, but I could not get past the overwhelming sadness of her loss. You could say the dreams themselves and the deep honest conversations within those lucid dreams are supernatural, but it gets deeper. It was a work day and my house was empty, so I decided to go to a late morning yoga class. My sister weighed heavily on my mind and heart. I had trouble staying focused, and I was struggling with balance poses.

After class, I went to my car in the large mall parking lot completely distracted. When I got in my car, I noticed something sitting on the hood. I got out to get a better look, and it was a teapot!  Not just any tea pot – a Hello Kitty tea pot. My sister, the tea lady, had decorated her daughter’s room with Hello Kitty paraphernalia when she was a child. It was their thing, the tea was our thing. My niece lives in a different part of the state and was shocked when I told her the story, excited that it was not only a teapot but a Hello Kitty tea pot – a double connection!

Now, I’m not saying my sister herself actually placed the teapot on the hood of my car, but could it be that her spirit influenced the person who found the teapot? Someone had to find it, decide to pick it up and place it on the hood of my black Honda in a sea of cars in a crowded parking lot. Skeptics might say it’s a coincidence, but what a supernatural coincidence. Someone had to find a random teapot with a Hello Kitty design, which had such deep meaning for both my niece and myself, and then look around a parking lot and say let me place it on the front hood of my car.

After that incident Eileen came to me in a dream and specifically asked me to tell her daughter that she visits her regularly and she wanted her to know to “remember the love. That was the most important thing! And to forgive her.”

It wasn’t exactly the supernatural Jack Kelly experiences in The Book of Souls, but it was a moment when the veil between the living and the dead was so thin that you could almost hear the voice say, “I know you miss me and are hurting, but I am around you and I miss you too.”

Kevin Moore is the author of Christmas Stories: 7 Original Short Stories. His first children’s picture book titled Me and My Shadow released May 28th, 2021. Moore has two books coming in 2022 – “The Book of Souls” a mystical ghost story and its sequel “The Book of Demons” (think Harry Potter meets the Exorcist). The Book of Souls is Moore’s first full length novel. His play “Conversations From The Sports Arena” was performed at the HBO Theater in Hollywood. Outside of work, Moore practices lucid dreaming and bardo dreaming. He is a yoga teacher who volunteers his time at a homeless shelter in Los Angeles, an advanced Reiki practitioner, but most importantly a dad!