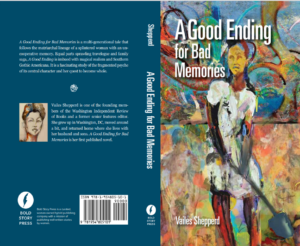 A Good Ending for Bad Memories is a richly sensual novel about a prosperous African American family before, during, and after slavery. It threads truth, folklore, legend, and fact, in a captivating exploration of a family’s complex legacy. The plot frames their experience and events in Egypt, Mexico, as well as in the United States, much of it through Mother who exhibits her multiple personalities, and whose children revolve around this mystery with wonder and devotion. Today Book Club Babble is excited to be talking to Vailes Shepperd.  Vailes, thank you so much for joining us today.  Let’s get started…

What inspired you to write the book?

I hope this question gets asked a lot because I’ll probably have a different answer each time. Hemingway saw a beautiful woman and wrote her into A Moveable Feast. There is a large male buck that has taken to sunning himself in my backyard. Seeing him, seeing natural beauty inspires me and even if not directly translated into a particular scene, I hope it is evident in the writing. This book was written over a long period of time, and so inspiration came, went, waxed, and waned. The one constant was the idea that the African American narrative in American literature is not as broad as its reality. My own family’s history tells me that there are unexplored variations and I wanted to write about a variation. The characters in this story have suffered, acted, reacted, and determined, finally try healing.

Can you tell our readers what the book is about (without spoilers)?

I’ll try. Ultimately, this story is about a family’s struggle to free itself from the weight of its past. They could become mired in the tentacles of their childhoods, act with the assumptions of their cultural group, gender and what the world supposedly dictates, but they resist.

What did you learn when writing the book?

How amazing it is when words come together to illustrate exactly what you mean.

What surprised you the most?

Writing surprises you by pulling things out of your consciousness, the information you were hoarding or stewing without understanding why. Sometimes, somehow in the telling of the story, guess what you didn’t know or remember, you knew?

What does the title mean? How did you come up with it?

The title comes from me wondering what to do with memories we don’t know what to do with. And if memory makes up the person, what can we do to alter the things that harm us to remember? Freedom from the taint of bad memories might be best but is it possible?

When did you first realize you wanted to be a writer or write this particular book?

I knew that I wanted to be a writer from a very young age, probably around ten years old while collaborating on our “masterpiece” on my grandmother’s old typewriter with my oldest brother, a spoken word poet. I grew up on stories, even in the way we still tell each other things, it is in story form. I wanted writing to be a career, but rejections made it seem impossible and there were so many things that I also wanted to do that came with price tags. I want to see the world and living is expensive. Still, writing is and was first.

How long does it take you to write a book?

Depends upon the book. I was once told by an author that he thought about a story for 10 years and then, sat down and wrote it within a month. I tend to do my thinking and writing together but hearing this from a well-known author did help me understand that the thinking too, is writing. It can take place away from your desk. 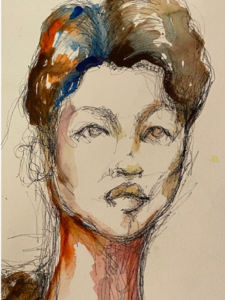 Vailes Shepperd has been writing almost from the moment that she learned to read.  In first grade, she collaborated with her oldest brother, the Spoken Word Poet, D. Dallas Vailes on a play that was performed for the Petworth Public Elementary School upon graduation. She is one of the founding/member editors of the Washington Independent Review of Books (WIRoB) (www.wirobooks.com), which began when the Washington Post ceased publishing Book World. She interviewed authors and wrote regular articles about writing for WIRoB. Vailes designed a writing program for high school students while teaching in a Saturday program under the auspices of SAPE (Substance Abuse Prevention Education). She was editor of The African Safari, by P.J. Fetner (St. Martin’s Press) and Take Me with You, by Scott Jackson, President and CEO of Global Impact. Her short story, “Monroe” was published in an anthology of women writing about men, “Brothers and Others.” She lives in Washington, D.C. with her husband and often enough, two sons. A Good Ending for Bad Memories is the first of four upcoming books.