A Conversation with Randall Fuller on The Book That Changed America

Join us for Author’s Cut live on Wednesday, May 17th at 9:00 pm for an in-depth discussion with Dr. Fuller. Be sure to subscribe to our site for invitations to all Author’s Cut events.

Charles Darwin’s theory of evolution didn’t just spark a science versus religion debate. In its day, the groundbreaking and revolutionary book, On the Origin of the Species, also fueled the debate over slavery in the United States. It made its way into the hands of prominent American intellectuals and influenced the thinking of transcendentalists and abolitionists alike. With The Book That Changed America, Dr. Randall Fuller explores how one stunning idea influenced a defining moment in American history. I’m pleased to welcome Dr. Fuller to BCB today.

Tabitha Lord: The controversy I learned about in school surrounding Darwin’s release of On the Origin of the Species by Means of Natural Selection focused mainly on the science vs. religion dichotomy. You’ve reframed this debate in the context of American antebellum politics and philosophy. How and when did you decide to investigate the link between the theory of evolution and the abolitionist and transcendentalist movements?

Randall Fuller: I was initially interested in writing something on Henry David Thoreau, but when I stumbled upon a line in his biography that said he first came across Darwin’s On the Origin of Species on New Year’s Day, 1860, I was intrigued. I began to look at the letters and journals of other figures who had been with Thoreau that evening, and the more I read, the more I realized how little I actually knew about Darwin’s reception in America during the year before the Civil War. In many ways, the book told me how it wanted to be written—or so it seemed. I would write one chapter, and then the book would seem to say, “Okay, now you need to explore this topic.”

TL: How familiar were you with Darwin’s actual text before undertaking this project, beyond what most of us learned in biology class?

RF: I was completely unfamiliar with the work. Like many people, I had learned about the theory of natural selection in high school and college, but my knowledge was really tenuous. One of the great pleasures of writing my book was reading On the Origins of Species four or five times during the process and really getting to know a work that is truly brilliant—an exciting and well-written journey into new ideas.

TL: The separation of science and art, or science and the humanities, into discrete tracks of study is a rather modern construct. Not that today’s artists or scientists don’t cross disciplines, but the way each is trained to investigate the world is quite different. Do you think, as a society, we have lost something with our singularly focused approach?

RF: As someone with a PhD in American literature, I certainly value expertise. But I do think that by walling ourselves off from other ways of knowing the world, by becoming specialists, we miss a lot. Antebellum poets and scientists were closer to one another than is imaginable today. A good example is Thoreau: one of the nineteenth century’s great writers, but also a world-class naturalist, geologist and, on top of all that, social activist.

TL: For me, reading history only comes to life when the people making history are the focus. I’m a fan of David McCollough’s work for this reason, and your book provided me with a similar reading experience. What a collection of fascinating characters! Thoreau, Emerson, Bronson and Louisa May Alcott, Asa Gray, and Charles Loring Brace are among those who grace the pages. Clearly, the amount of research needed to draw each one so vividly was daunting. Did any particular personality emerge as your favorite? Were you surprised by anything you learned about a particular person?

RF: They were all fun to get to know, and that’s what it feels like as you research a historical figure: as though you’re getting to know a friend. Each friend may be flawed and irascible or even appalling, but he or she almost invariably seems worth knowing. I loved getting to know Asa Gray because his energy and good cheer, which were such a vital part of his personality, helped American science enter a broader worldwide conversation about the natural world. For a similar reason, I also enjoyed finding out more about Louisa May Alcott, who managed to become a writer within a male-centered community of Transcendentalists and who had the difficult chore of finding her own way in the shadow of an influential father. The biggest surprise was Brace—I’d never heard of him before, but he was involved in numerous aspects of American society; without him, we wouldn’t have the foster-care system for children.

TL: As much as your work is a research project of epic proportions, it’s also a book, meant to hold the reader’s attention and interest. You elegantly weave personality into the scenes, capturing subtleties while focusing on the overarching theme. For example, in one section, Agassiz is listening to Bronson Alcott ramble about evolutionary theory, rejecting what he perceives to be its materialism. You write, “He (Agassiz) listened as long as he was able, and then he did what many people do when cornered by a monologist sharing a pet idea. He smiled politely and glanced at his watch.” From a writing craft perspective, how did you decide where and when to insert what I’ll call these tidbits of personality?

RF: That’s a great question, and one I’m not sure I can answer. What I can say is that in addition to doing research, I read a lot of novels while working on this book, hoping to learn tricks of characterization from them. I love Tolstoy for this reason. Alice Munroe, too. For years I’ve carried around a moleskin notebook and I fill these with observations of the people I write about, gleaned from reminiscences and biographies and journals and any other sources I can get my hands on. For the episode you mention, I was lucky to have a first-person account of that conversation between Agassiz and Alcott; the writer beautifully described Alcott’s obtuse rambling and Agassiz’s increasing impatience.

TL: History is often made because an individual, or a group, makes a leap in human thinking. The world is round. The sun is the center of the solar system. Time is relative. Life evolves. Whether a new form of government emerges, a social movement unfolds, or we put a man on the moon, our perception of the world, and our place in it, is forever shifted. Then as now, revolutionary ideas are often met with fierce resistance. In the current political climate in the US, which can be perceived as anti-intellectual and anti-science even, this book feels timely. For me, it served as a reminder that progress has always challenged humanity. Good people, thoughtful people often resist an idea because it doesn’t fit with their worldview, regardless of proof to the contrary. But still, we must continue to investigate and debate. When you were writing this, were you struck by the fact that we humans haven’t changed all that much in our essential nature?

RF: Well, that’s beautifully put, and exactly what I hoped readers would take from my book. Very smart people, and I’m thinking here of Ralph Waldo Emerson, had great difficulty seeing the full import of Darwin’s ideas. Alcott, Brace, and even Gray all bent Darwin’s ideas to fit the contours of their respective belief systems. We share this tendency with people of the past. All of us have blinders, fashioned from our backgrounds and friends and education, etc., and the best we can hope for is to try to encounter new ideas with as much intellectual courage and honesty as we can muster. This is why Thoreau is the hero of my book—unlike everyone else I wrote about, he refused to retrofit Darwin’s ideas to confirm his vision of the world. He refused to embrace only that knowledge which portrayed things as he wanted them to be. He tried to take Darwin’s ideas as they were presented in Origin of Species and to test them against his own vast experience with nature.

TL: I’m curious how long this project took you from start to finish?

RF: With false starts and various rabbit holes factored in, about four years.

TL: Are you currently at work on something else?

RF: I’m trying something completely different: an account of Henry James and Oscar Wilde in the London theater. So far it’s been enormously fun to learn about the outsized personalities that made up that world in 1895. The question driving this project is deceptively simple: why did Henry James, one of the greatest novelists of the nineteenth century, devote five years to an unsuccessful bid to become a famous playwright?

TL: Thank you so much for your insights and best of luck with the new project. I look forward to talking with you on the Author’s Cut on May 17th! 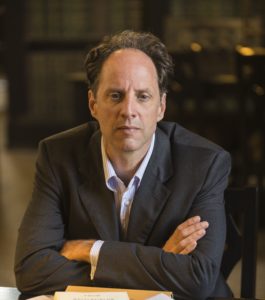 Randall Fuller is the author of From Battlefields Rising: How the Civil War Transformed American Literature, which won the Phi Beta Kappa’s Christian Gauss Award for best literary criticism, and Emerson’s Ghosts: Literature, Politics, and the Making of Americanists. He has written for The New York Times, The Wall Street Journal, and other publications, and has received fellowships from the Guggenheim Foundation and the National Endowment for the Humanities. He is the Chapman Professor of English at the University of Tulsa.